December: Let's do this thing!

Well, I have to read 2 books this month, so I'm a little worried, but I also have the last 10 days of the month off, so I'm going to keep positive and tell myself that I can do this!

The first book I'm tackling is Cutting for Stone, a novel that has a lot of fans out there. Every single solitary person I know that has read it, and I'm not exaggerating that, has sung its praises. I'm a few chapters in and I think I will like it. It's seems like a sweeping generational story of two brothers, both doctors. One brother is the narrator, and it starts with him describing the lives of his mother, a nun! and nurse at a hospital in Africa. The father (although there seems like the potential for that to be a contested title) is a surgeon and friend, Dr Stone.

I'm not sure what I'll do after that one. I have one novel left, The Book of Night Women and two books of non-fiction, The Best and the Brightest and Embracing Defeat. I'm *hoping* to tackle The Best and The Brightest, since it's a book I've wanted to read for years. We'll see how it goes.

How are things looking for you? Not like this has been a busy year or anything. Heh.

Take 2: The Warmth of Other Suns

Sorry to leave you hanging there! It's been a busy week, what with the traveling, the movies, and the turkey avoidance* and all. But through it all, I've been thinking of The Warmth of Other Suns because it is just a tour de force. This story just had propulsion and velocity, and it dragged me along for the ride.

I guess I should start with the basic overview. This book of non-fiction was written by a Pulitzer Prize winning journalist (and total hottie, at least according to Darius) named Isabel Wilkerson. The book created a big buzz when it came out, and I bought a copy right away. The book tells the mostly untold story of The Great Migration, which was a period of time from after WW1 all the way up through the 1970s when over 6 million African-Americans left the South for a better life in the North.

The book primarily follows the lives of 3 "migrants": George Starling, who leaves Florida for New York; Ida Mae Gladney, who leaves Mississippi for Chicago, and Dr. Bob Foster who leaves Louisiana for California. However, it's clear from the extensive footnotes that Wilkerson interviewed thousands of people for this book. Through the stories of these 3 individuals, she traces the major migratory paths from North to South and tells the story of the migration: what caused it, what ended it, what happened to those left behind, and the unexpected challenges of life in the North.

The book is just amazing on so many levels, I hardly know where to start. Of course, the drama of the book is the human lives and stories that the author portrays with such dignity and care. Each character's story begins when they are still in the South. It's one thing to know in theory what it was like to live under the tyranny of Jim Crow, but reading these stories...it's heartwrenching and awful.. It's humiliating and embarrassing. It's shocking to think how recently this happened. As the book continues, each character escapes the South for the freedoms of the North and West...only to find that they are not too much better. Yes, jobs are available, but African-Americans are given the jobs with the lowest skills and the poorest wages. They are sequestered into certain parts of the city. And yet, their lives and opportunities are still better than what remained behind.

I couldn't help but read this book with a sense of awe, both for the craft of the storytelling and for the stories themselves. I just feel so grateful that these people shared their lives with the author, and that she created this book. It's amazing how strong people can be in the face of such adversity. Parts of the book were so moving that I doubt I will ever forget them. Here's Ida, describing what it was like to vote for the first time:
Back home, no one dared talk about such things. She couldn't vote in Mississippi. She never knew where the polls where in Chickasaw County. And even if she had had the nerve to go, she would have been turned away for failing to pay a poll tax or not being able to answer a question on a literacy test for which there was no answer, such as how many grains of sand there were on the beach or how to interpret an obscure article of the Mississippi constitution to the election registrar's satisfaction. She and most every other colored person in the South knew better than to even try....

On Election Day, Ida Mae walked up to the fire station around the corner from her flat...to vote for the first time in her life...Ida Mae was not certain what to do. She had never touched an election ballot. She walked in, and a lady came over and directed her to where she should go. Ida Mae stepped inside a polling booth for the first time in her life and drew the curtain behind her...and tried to remember what the lady has told her about how to punch her choices for president of the United States and other political offices. It was the first time she would ever have a say in such things. "She showed me how to do it," Ida Mae said.

...She did not see herself as taking any kind of political stand. But in that simple gesture, she was defying the very heart of the Southern caste system, and doing something she could not dreamed of doing--in fact, had not allowed herself to even contemplate--all those years in Mississippi. (303-305).

Needless to say, reading those passages right after an election in which voting was purposefully made so difficult for so many people made me sad and angry. If this book shows anything, it's both how amazingly far we've come, and how far we still have to go.

This book is not only the amazing story of heroic Americans, but also an important correction of the historical record. For years, people seemed to think that the Great Migration was accidental rather than purposeful. Historians assumed that people left because the draw of jobs in the North was so great, when in fact it was desperate people fleeing from the oppression of Jim Crow South. The book is simply astounding.

*I have successfully avoided all turkey eating activities again this year. Meanwhile, and this is funny, my Mom's friend Cheryl was also at dinner. Apparently, she doesn't like turkey that much either. When asked, my go-to answer is, "I think turkey is a little too game-y." So I say this to Cheryl, and she said, "Oh yes. To me, it just tastes *dead*, you know what I mean." Of course, that's exactly what I mean when I say gamey! Turns out there is someone in the universe more blunt than me!
Posted by Jenny at 10:10 PM 1 comment:

Completed: The Warmth of Other Suns 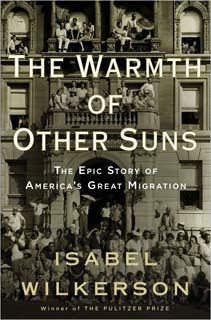 This was the most amazing book I have read this year.

I feel like I should just let that sit out there for a while, and tomorrow when I'm less tired and can get past the "Wow!" to something more meaningful, I'll come back and say more.