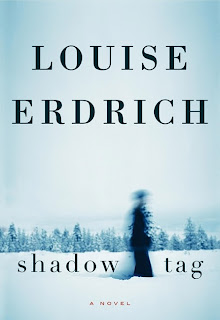 As you know, I consider Louise Erdrich to be one of my favorite authors. Despite her recent (and infuriating) foray into quotation-mark-less prose, I still love her work. It's sharp and insightful, but also heartfelt and warm. She manages to perfectly understand and describe the human condition.

This is a short book, one that tells the story of a marriage on the rocks. Gil is a well known artist, but he's most well known for the long series of paintings he's completed over many years of his wife, Irene. Gil and Irene have three kids, and this portrait of their broken marriage is strangely compelling with just the right hint of emotional distance. The narration is split between Gil, Irene, and the kids. In this way, there's no one character pulling us too deeply into the narrative. Their motives are sometimes crystal clear, and other times veiled in levels of obscurity. It's an interesting trick, and so different from her earlier novels, that I found myself wondering what was going on.

One of the things that's interesting about having a beloved author is that you have a tendency to see their style grow and change, but there's also those authors that get stuck in a rut. Every single one of Erdrich's previous novels have been generational family sagas of Ojibwa Indians, almost always with strong ties to the reservation. I enjoyed those stories, I loved them! But this book and her most recent, The Round House, have been very different. The focus is on a single family in a single generation, and The Round House has a single narrator rather than many. In this case, the tight focus on Gil and Irene makes for a claustrophobic and intense read: these are unhappy and troubled people, and being privy to their split is wrenching.


I did like this book, though. One thing that I was struggling with was that the characters felt emotionally distant in a weird way, or maybe I should say weird for Erdrich. Of course, there was the annoying lack of quotation marks. But even more than that, it just felt like I wasn't quite in their heads the way I was with previous characters. Lo and behold, it turns out that the story is being written by their daughter many years later. Of course, this conveniently explains the lack of quotation marks because the daughter is remembering or imagining what they might have said to each other. But is also explains the distance, in some ways the daughter is unable to imagine what her parents must have been thinking. She's guessing, hoping, or assuming.

All in all, this was a satisfying read. I left the book at home, but I might go back and add some to this later. There were lots of lines I marked to share with you!