Completed: The Man Without a Face

Continuing the 2017 Bitmoji theme... we actually used these in a text conversation about this book! I guess this probably says all you need to know about what this book was like for us.

Whelp. You and I read this really depressing book together, basically trying to be better citizens of the world... but mostly scaring the shit out of ourselves. After the 2016 US presidential election and the news that Russia had influenced the outcome, I asked a FB friend with extensive Russia knowledge to recommend something to read. Kristina recommended this book, The Man Without a Face, saying that you can't understand modern Russia without understanding Putin.

It's easy to summarize this book: Putin does terrible things! But our reading was definitely filtered through the experience of reading with a newly inaugurated tRump in the White House. For both of us, it was discomfiting to read what feels like a futurecast of how things could or might turn out here. You took to calling it "tRump's playbook" (or I guess, Bannon's playbook?), which seems terrifying. I don't want to live in a dictatorship! What can we do to stop it?

In fact, we spent a lot of time talking about how we were grateful that it had been written pre-tRump. Had it been written after, it seemed likely we would have concluded that the Putin's flaws were massaged to highlight the similarities to tRump. Perhaps we would have been skeptical, but since it was written years ago, it was there for us to discover on our own.

One of the pleasures of this book is how great the writing is. Gessen is a journalist, and she weaves a tight and highly readable tale of Putin's rise from lowly KGB agent to Russian President. She makes it easy to follow the complex geography of places and people that populate the book.

However, I think for both of us, it was impossible to read descriptions of Putin's worldview—his greed, his pettiness, his need to control and manipulate others, his megalomania, his inability to have others question him—without thinking: this sounds like an exact description of tRump! Here's a selection of some of those lines below:


"No one is easier to manipulate than a man who exaggerates his own influence" (18).

"Putin could not resist taking it all...On several occasions, at least one of them embarrassingly public, Putin acted like a person afflicted with kleptomania" (258).

"The person I described in this book—shallow, self-involved, and not terribly perceptive, and apparently very poorly informed—was indeed the person running Russia, to the extent that Russia was being run" (304).

I think there were a few scenes that stood out to both of us: Putin and his wife returning from Germany with a 20 year old washing machine, an unbearable luxury in Russia; the stealing of the Super Bowl ring from the Patriots owner; and the chilling scene where the author meets Putin, only to realize he doesn't know who she is. All dictators are out of touch with the people whose lives they destroy, either from disinterest or from the people around him being afraid to tell him the truth. Impossible not to make the connection to tRump, who shows us every day that he knows nothing about our country, its citizens, or our government.

Here are a couple of "notes" that you made in your book that sum up how we felt as each new Chapter of Doom piled on: 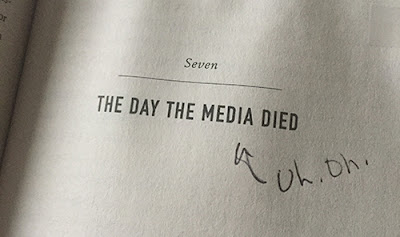 Given tRump's open war on media going on at this very moment in our country, this does not seem like a good sign for us. That chapter was followed by: 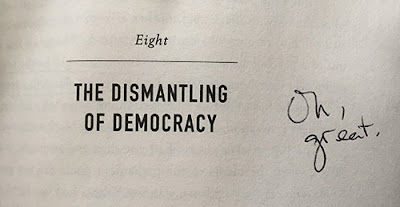 This chapter read like a harrowing account of what is going to happen to our own country, and soon. Granted, we have had democracy longer than Russia has, but there were many, many parts of this plan that felt like, "Oh... that's... totally plausible..."

Both of us found the description of how Putin harnessed right-wing hatred for LGBTQ Russians to create a kind of axis of hatred to be surprising and terrifying, especially after there was some hope demonstrated with the marches and the voter turnout! After he decided to attack the gays, other countries banded together behind that flag of hatred and decided he was a man on a holy mission.

Who are we fighting, Kelly? I don't know about you, but the descent to this kind of tribalism scares the everloving crap out of me. I want people to be better. We talked about the differences between our country and Russia, our long history of freedom, widely available social media, education – but will that be enough to save us from those who embrace hatred and authoritarianism as the twisted new American way?