Jenny's 9:15: An Arsonist's Guide to Writers' Homes in New England 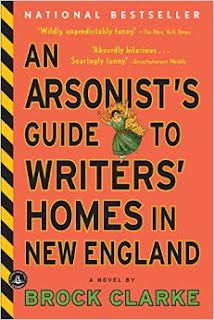 The thing that amazes me most about this book is the fact that there's a plural possessive right there in the title! I bet the author *really* had to fight to keep that one. This is like the holy grail in my life as a teacher: kids who know how to make a plural possessive.

Okay, moving along. I borrowed this book from a co-worker over a year ago, right before Janine's wedding. We were talking about how the wedding was going to be at Edith Wharton's home, The Mount.  The co-worker (guilty admission: he has since left my school and works somewhere else. Should I mail the book back to him when I finish it?) said that I should read this book and handed me his copy.

The original intent was to read locally, an activity I do find tremendously enjoyable. However, it was just too busy of a wedding weekend for me to actually read this one. So, here I am, 14 months later, thinking now is the time. I know I'm ahead, but since I start school next week and I'm taking 2 classes this quarter, I would love to get ahead.

I literally know *nothing* about this book! I vaguely remember reading a review of it, but I'm pretty much going into this cold. Whee! Living on the edge!

This post brought to you courtesy of exclamation marks,
Jenny
Posted by Jenny at 10:12 PM 2 comments:

Completed: Command and Control: Nuclear Weapons, the Damascus Incident, and the Illusion of Safety

I'm going to split my review into 2 parts here, the first about the content and the second about the structure.

This book is sort of cheerfully terrifying. I don't know how else to explain it---basically, since WW2, the world has been manufacturing nuclear weapons at a truly alarming rate, and we've simultaneously done a pretty terrible job of monitoring them carefully. The phrase command and control refers to the chain of command by which nuclear weapons would, should, or could be deployed; and control refers to their safety at all points along the way. At it's most basic level, I'd say the thesis of this book is something along the lines of: Do you have any idea how fucking lucky we are that one of these weapons hasn't been fired accidentally? Well, pretty fucking lucky is the answer.

I learned a lot of super interesting stuff about what happened to the nuclear program after the end of the Manhattan project and the dropping of the bombs in Japan. I won't go too much into it, but basically, the whole thing is too fucking bananapants irresponsible to be believed, not to mention the absolutely massive cost of these programs. It's hard not to read this and think, you spent *how much* on these weapons and you can't invest in our fucking schools? The description of the military's infighting for control of nuclear weapons and the dollars that accompanied those weapons is jaw-dropping and craven. Our own plans to blow the Soviet Union to smithereens can best be described as pathological.

Charmingly [JK], the military uses the following Native American phrases to describe levels of  nuclear weapon accidents (as opposed to reactors, which get a completely different rating scale). A bent spear is an incident involving nuclear weapons, warheads, or vehicles transporting nuclear materials that are of significant interest. These are usually breaches in protocol or handling. On the other hand, a broken arrow is an accidental event that involves nuclear weapons or warheads, but that doesn't create the threat of nuclear war.

About a third of the book describes the most recent significant broken arrow event, the explosion of a Titan II missile at a silo in Arkansas. One morning in September of 1980, a mechanic working on the missile dropped a socket wrench (a big one--weighing over 25 pounds) into the silo. The wrench pierced the side of the missile, and eventually a super dangerous and highly flammable chemical called an oxidizer caused the missile to explode out of the silo. It was really only pure luck that the nuclear warhead it was carrying didn't explode in the middle of the Arkansas countryside.

To sum up: pretty fucking amazing we have all these super dangerous weapons laying around *all over the world* and one hasn't gone off yet. Gee, wonder how long our luck will last?

The Structure
I read a lot of non-fiction books, and I realize and accept it lends a richness and complexity to tell more than one story at a time. A good example is the one volume history of the Civil War called Battle Cry of Freedom. The book tells both the military and the political history of the war, and it has a very simple structure: the chapters go back and forth between battlefield and government, moving forward in chronological time.

However, I'm coming to really effing hate a common organizational trope of narrative non-fiction: interweaving or braiding related stories together to form the main narrative. I first identified this trend in my reading way back in 2011  right here on our blog!

Let me tell you a little how it worked out with this book, which runs about 485 pages, split up into 4 sections and 20 chapters. What I'll call the A plot, which is clearly the main "story" the author wants to tell is that of the Damascus Incident. He starts the book with the "Oh, Shit! I dropped the wrench" story, and it's what he keeps coming back to, but in actuality, the retelling of that story is only about 125 pages, maybe a quarter of the book.

It's almost easier to make my point by showing you the Table of Contents: 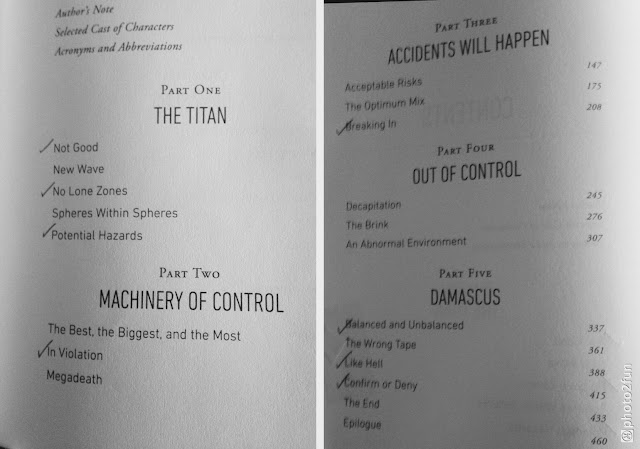 The chapters with check-marks are the ones that tell the story of the Damascus incident, the explosion of the missile in the silo. It starts out making sense: every other chapter tells the Damascus story, and the other chapters tell the story of our nuclear weapons history. But then, in that middle 200 pages, it all goes south. All of a sudden, there's way more "history" story than "Damascus" story.

I guess it's sort of a chicken and egg problem, because by that point, it's really unclear which plot is serving the other:
A) Is the author using the Damascus story to illustrate the command and control dangers?
B) Or show how command and control problems led to the Damascus incident and potentially leaves the door open for even more terrifying incidents in the future?

By the end, it's pretty clear that his intention was to do B, but the organizational set-up is for A. I think it's a failure of the text, and one that is completely self-inflicted. It has real consequences for the reader. There's a lot of jumping back and forth, a massive cast of characters, and complex military jargon. I had to constantly remind myself of people, events, and timelines from previous chapters. There's a cast of characters and a list of acronyms in the beginning, but it really didn't help my feeling of annoyance. Even the historical chapters fuck around with the timeline, at one point backtracking from Jimmy Carter's administration back to Eisenhower's. It's just sort of maddening. It doesn't actually add anything to the text, and instead creates a sneaking suspicion that the author had a bunch of great research and interviews about the Damascus incident that he just couldn't condense down to a New Yorker article.

This is not just a problem with this book. I had the exact same suspicions in another book I read this year about surfing the Cortes Bank, which really a book about the history of surfing with extra chapters about the Cortes Bank. I guess my instinct is to be sympathetic to the authors, even though I'm expressing frustration. Clearly they have a ton of research and are looking for the way to tie it all together into a compelling book. I'm left wondering when it was that chronological order of historical events fell out of fashion as a way to accomplish this task?

It seems likely that this is a special problem with narrative non-fiction. Obviously, the author wants to TELL A STORY that illustrates the point. But what to do when that story doesn't quite balance out to the history behind the story? Well, I guess you get books like this.