Completed: The Fall of Rome

Well, that "four more weeks to go and why haven't I read more of these books" panic struck so I decided to sit down and work on one of these TBR books. We should really think about how we want to handle 2017...I do really look forward to the months we have a common read (speaking of which, we should talk about our December book soon! ), so maybe we should do MORE of that? Add some graphic novels and comics into the mix?

Anyways, I bought The Fall of Rome on the recommendation of a friend of mine from grad school. It's about the intersecting lives of 2 teachers and one student at a fancy prep school, and my friend thought I might like it since it's an exploration of how black students and faculty members wither or survive in mostly-white institutions. 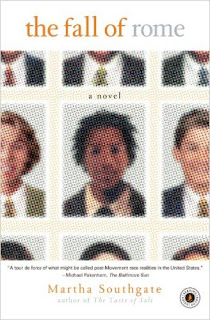 I feel bad because I'm going to give this one a pretty quick review (the end of the year reviews tend to be a little more perfunctory). I liked this book a lot. It's set an exclusive all boys boarding school in Connecticut in the late 90s.   There's 3 narrators: Jerome Washington, a Latin teacher and the only black faculty member at the school; Jana Hansen, a newly divorced teacher; and Rashid Bryson, a young black kid new to the school and reeling from a family tragedy.

It's a good read! The drama of the book is almost all internal: how do people internalize their own tragedies and traumas? And what happens when those lives intersect and bump into other damaged people? The author does a great job of making each narrator sympathetic when you're in his/her chapter. But the tour de force character is the older teacher, Jerome Washington. He's someone I both understood and felt really sympathetic towards, but he was so repressed and tortured that I also wanted him to get his ass kicked. Jerome's been hiding from the world at that boarding school, and the appearance of the fierce and fearless Rashid brings everything to the surface. My one mild critique of the book is that since the characters struggles are all so internal, the relationships between them seem less *real* than I would like. I don't really think it's a weakness of the text, but just a natural consequence of a book where all the conflicts are internal. Even big plot points are really just fuel for the inner struggles. For example, Jana and Jerome have a brief weekend affair, but it's mostly fuel for contemplation. There's not much actual fallout from the event, even though Jana comes to deeply regret it: not because she's sad about the sex, but rather because she realizes she's disappointed in Jerome as a person.

One thing that's always interesting to me is how writers portray school, but honestly, the setting is just a metaphor for America: it's a place that's stuck in its ways, and afraid of the future, wondering how these brash young folks will challenge and change us. It's a nice little weekend read.