This might be one of those super short reviews---honestly, I just don't have much to say about this book. I probably would have really enjoyed it if it had just been a magazine article, but it didn't seem meaty enough to warrant a whole book.

The author describes how checklists are valuable when used in complex situations. It may seem counterintuitive, but when faced with complex, multi-step tasks, checklists help people make sure they have done the most important steps.

Gawande goes on to describe how checklists have helped in medicine, which is interesting enough. And he describes how they are also used in aviation, which is interesting enough. So, it's pretty convincing that checklists are helpful when there is complexity and procedures. But it was hard to see how this would apply in my own work. My job is complex but it's not governed by procedure. Good curriculum design just doesn't quite work the same way as surgery---and so it just felt sort of weird. I mean, dude, you're going to call something a manifesto, it should be something that everyone would benefit from, right?? 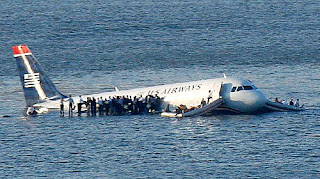 Don't get me wrong. There's some interesting stuff about how to make good checklists and the different types of checklists, but it's not something I actually think I can implement in my life.

There were two parts of the book that I most enjoyed. Probably the best part of the book was the ending where he described how the pilots of US Airways flight 1549, which is the one that the pilots landed on the Hudson River after the engines were taken out be geese. Honestly, it's a great story! And he talks about how part of the checklist actually said, "Fly the airplane!" because under such stressful circumstances, it's possible for pilots to focus on everything going wrong and forget to fly the plane.

The other part I really enjoyed debunked something of an urban legend. I'd heard a story about how the band VanHalen required all their venues to remove all of the brown M&Ms out of the bowls of candy that were placed backstage. As it turns out, the brown M&Ms were just a test. The sets, lights, and staging of their shows were so complex that they threw that M&M clause in as a test. If they went backstage and saw brown M&Ms, they would know they had to go through and test everything else at the venue. It was a warning that there were going to be other problems. At one venue, after finding brown pieces of candy, they discovered that the stage would have collapsed under the weight and load of the set and were able to cancel the performance. This one item on the checklist helped them judge the level of detail at any particular arena.

There was nothing *wrong* with the book. It was fine. But it was not my manifesto.
Jenny
Posted by Jenny at 8:28 PM 4 comments:

I've been reading lots of fiction for the Tournament of Books (so far I've read 8 of the 17), so I mightThe Checklist Manifesto is by Atul Gawande, a doctor who also writes for The New Yorker. I know I've suggested his book Being Mortal to you. 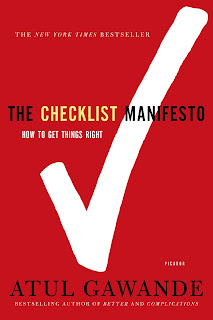 take a break and read a little non-fiction. And this isn't even the type of narrative non-fiction that I like to read that teaches history through a story.

I bought this book for a grad school class but ended up reading something else instead of it. This book makes a case for why using checklists can help us deal with the complexity of our modern lives. Certainly I know checklists are helpful for my students (there's even a checklist maker app my friend Andrea uses called Checkli). However, I'm sort of curious to see if the idea of using checklists is applicable to teaching or curriculum design.

At one point, I did read a critique of checklists in education, but I can't find it right now. I remember the book it was in, but I'm pretty sure it's at school.