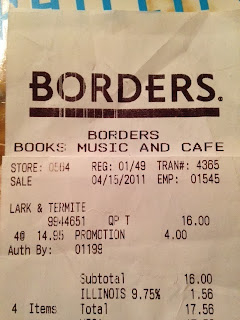 Sorry I never wrote the preview post on this one. The truth is, I didn't remember much about buying it! I thought for sure I bought it at the Borders bender, but I cataloged those books, and it wasn't there. Until I got to the back of the book and found the receipt! A ha! As it turns out, the Borders Bender was an ongoing event lasting several weeks. Looks like I picked up Lark & Termite along with 3 other books at a table of books marked $4 each. Score!


When buying books at a sale table, my move is to look for books that had good reviews. It's all about what you find, since you'll almost never find what you're looking for. And since I read lots of book reviews, I have lots of titles floating around in my head as possibilities---and I mean lots of book reviews: The New York Review of Books, The New York Times Book Review, the Chicago Tribune Printers Row...and that's just the good ones. I even read the book reviews in Entertainment Weekly! And, of course, let's not forget word of mouth. Some of my favorite books come recommended by others. I keep all that stuff stored up in my brain for book sales! (I try to stay away from bookstores if I can, but the major danger I face now is in used book sales. There are lots of those around here that benefit local charities. I try to only *give* books away rather than buying books at them, but it's hard. The one at the Newberry Library is a freaking zoo, but it's also very well organized and most books are only a few bucks. On the other hand, the one in the neighborhood is just a mess and therefore easier to avoid. I won't let myself go into used book stores. Too dangerous.)

In the case of Lark & Termite, I had just heard good things. It was a National Book Award finalist and I must have read a few good reviews. Also, and this is a weird one, there was something about the author's name that just seemed familiar and pleasing. I kept thinking that I must have read something by her before, but what? Well, a quick google search revealed what I probably had been thinking: there's a romance author named Jayne Ann Krentz. Not exactly the same, but there you go. Hahah! 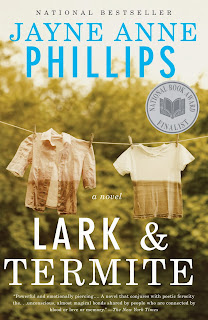 Anyway, Lark & Termite is a story with dual story lines. The first is of 2 siblings: 17 year old Lark and her half brother, the 9 year old Termite. (This naming protocol was a little too precious for me, but whatever.) They are living with their Aunt in West Virginia from July 26-31, 1959, and the whereabouts of their mother, Lola, is a mystery. The other story is about Termite's father, Robert Leavitt, a soldier in Korea on those same July days, but in 1950.

I would call this book...just okay. Actually, it would probably make a decent aBook. It has long, lyrical passage that are lovely to read. But I think Phillips didn't really know what she wanted to do, here. I think the timing (the same days in July!) of the dual plots is supposed to lend some mystical quality to the story, but it really doesn't work. The Leavitt plot is too thin to hold up its end of the pairing. He is leading a stream of Korean refugees somewhere when they are attacked in a round of friendly fire. He then hangs on for the next two days...so that in nine years, when a story unfolds for his son in West Virginia, the timing will be similar? Um, okay. He's a sympathetic but flat character, and I started to wonder why the author kept him alive in a sort of Dick Clark-like stasis.

The interesting character is Lark, who's funny and fierce and independent. Their Aunt Nonie is the one officially in charge of Termite, but he's really Lark's baby. Even though he's 9 to her 17, his profound medical challenges, and his physical and mental handicaps, make him little more than a child. But even that's a problem, as there are several times that Termite narrates, and it just strained my credulity to the breaking point. Nonie gets a few turns at narrating, too, and she's a totally interesting character. The story of how she came to be caring for her sister's kids was compelling and interesting.

The plot picks up in the last third as a massive rainstorm raises the river through town to flood stage. Lark and Termite are alone in their house, and the story of Lark going down into the flooded house to find Termite's lucky moon charm and his wagon is a visceral and haunting scene. There's some good here, but it just felt like too little too late. I guess I'd say the structure of the novel seemed forced, and that got in my way of enjoying the story. There was also a weird mystical figure who appears to bring Termite a new wheelchair. Umm...sure. I guess as a mystical item, a wheelchair would count. But in this novel, it was a strange addition that didn't really work. At all.

Also, there's enough creepy sexual action between Lola and a bunch of the men in town, and then one of those old men later putting the moves on Lark that I felt a little grossed out. Lark has a precociously early sexual relationship with the boy next door that was also a little disturbing. I won't go into the details, but at one point, I thought, Was that really necessary?!

Anyway. It was okay. It ended up better than I expected, and I always like that feeling. On to what's next. Only one more book for me this year!

Kelly's Book 10.13: Michigan: A History of the Great Lakes State 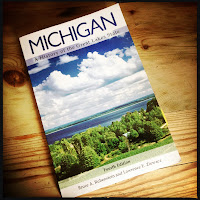 I have finally finished Little, Big but... yeah. It was such a slog to get through, it's even more of a slog to write about. Maybe this weekend? We'll see.

In the meantime, I am on a mission to finish and I have 3 books to go, so I have started Michigan: A History of the Great Lakes State.

From the start, I will tell you I have a problem with the very name of this book, although... further research indicates that I need to let this problem go because I am apparently the only one having this problem?

I have always thought that the nickname for Michigan was "The Great Lakes State." You know, cause it's made of two peninsulas that are created by... The Great Lakes! (Fun fact: if you are in Michigan, you cannot be more than 85 miles from a Great Lake.)

A few months ago, I saw a dishtowel identifying Michigan as "The Great Lake State." Notice: "Lake" is singular right there. I was all "Ooops! That's not right!" Or... is it? So I looked into it. Omigod! It's not at all clear!

So that's it, right? It's singular and these authors have their heads up their butts and I cannot possibly trust anything that they write!

BUT WAIT! The plot thickens! The state quarter for Michigan says "Great Lakes State." WHAAAA---? Aaaand... most Michiganders (and that nickname is a whole other topic, believe it or not) have said "Of course it's Great Lakes State" (plural) when I have asked (including, clearly, the authors of this book).

More importantly than any of this, there seems to be zero discussion/debate about this on the Internet anywhere! In a world where the abbreviation "Gd" for "Grand" (still bizarre!) gets thoroughly examined... where are the nerds speculating about plural vs. singular "Lake" in our state nickname?

All this to say... I hope the authors address this question in the book and give a very good and clear reason for going with the plural in the book title.

Also... yes, yes. I have thought about this way too much, including spending valuable reading time creating that stupid graphic.