I finished this book back in April and I'm finally getting around to writing about it. Ugh! It's kind of been swirling around in my head now with all of the other books about Detroit I have been reading this year, I must admit. But let's see if I can pick my brain and recall what we had here...

The book begins in 1967 in Detroit, so you know early on that we're going to hit on the riots before it's over. The central characters are a Jewish man, Harry, who lives in Detroit with his family and owns a shoe distributor (located at Grand River and Joy -- hence, the book title) and a black man, Curtis, who works for him and rents the apartment upstairs from the shoe warehouse with his son. This book did a nice job of juxtaposing the development of the personal relationships between the two men against the racial tensions going on in the city of Detroit at large.

The story itself isn't that original -- Harry's family facing the topic addressed by Harry's wife's Women's Club: "Detroit's Changing Neighborhoods: Stay or Go?" (Ugh. This is a Kindle book that doesn't have page numbers -- I'll use "Location numbers" for references in this write up...) [593] But it's handled pretty well and there is growth and discovery on both sides of the fence (in the end, of course, Harry's family "goes" -- not really a spoiler there. It's all in the history books.) Of course, Curtis has his own struggles as he tries to survive in Detroit while his son is toying with joining the Black Panthers.

In writing this up, I looked at the book again and found that I had highlighted a lot of text -- way more than I usually do. I really enjoyed the actual writing in this book. So let's take a journey through my notes here...

This line made me smile -- I'm not sure if it was intended to be "funny," but it struck me:


Harry remembered what Ruth, his wife, said: that the word Jew, by itself could sound ugly, spit out. It was better when softened with the ish ending, as in short-ish or small-ish, suggesting not exactly short or small but somewhat. [98]

When someone has spray painted an anti-Semitic comment on Harry's business, he hears two cops talking. I thought this passage was really poignant:


This string of words that they were using with each other, "women," "tenant," "teenager," was getting to Harry -- as if one word was all you needed to know, as if it telegraphed everything, funneled whole populations down to a label, like the label on the window, like the y in boy with its narrow throat in which a whole huge history of meanings and individual variations could disappear. Women: foolish. Tenants: losers. Teenagers: delinquents. [314]

This sentence succinctly sums up that time of "Stay or Go?":

The author reflects on the evolution of moving days -- from excitement about new neighbors to trepidation over neighbors moving. I thought some of this writing was really evocative (and echoes the stories I've heard from locals in the same situation...):


In those days, a moving van was not a welcome sight. Not the kind of event, like once upon a time, that brought the children running, to sit near the curb and watch the strong men carry refrigerators, bureaus and beds...[2886]

(Although, I must say this bit might have been a tad overwritten, as we have this passage shortly thereafter...)


In the old days, when a moving van pulled up, it was like a holiday, like the circus coming to town. It could have been prancing ponies with feather crowns, descending from the ramps. Or a line of elephants, trunks swaying like some ungodly extensor hand. [2899]

Gotta love this observation of a picky eater at the dinner table:


Today, she had the peas to contend with. It was one disturbing pile of vegetables after another. [2994]

This line applies to many people and their life's work:

Snapshot of the pre-internet world... as the riots rage on downtown, Harry and his family, just a few blocks away, rely on the television for coverage:


By now, they'd heard some sketchy news that the crowds and looters and fires had spread somewhere near the Riviera and the Grande.

"We don't know for sure," he said when Ruth gave him a look. "No reason to talk about it." It was maddening that with all the news, none of it zeroed in on a the particular block of interest to him. [3435]

I'm not sure if that's much of a "review" (and I actually highlighted even more text than that!) but it gives you an idea -- there's a lot of great imagery in this book and I think the author does a nice job of capturing a specific point in time.

Of course when reading books about where you live, it's fun to say "Hey -- I know that place!" There was a lot of that in this book. A few things that really stood out to me ...

As a kid, Harry witnesses Diego Rivera and Frida Kahlo as Rivera is painting Detroit Industry, an enormous mural at the DIA [3736]. Have you ever seen it? It's truly amazing. They have this really cool iPad app (and iPads to borrow while you're there) that gives you a complete tour of the mural. The thing is huge, so it's a really neat way to experience/learn about it while you're in there. (Or at home -- you can check it out here online or download the iPad app here. )

Before reading this book, I had never heard of the Birwood Wall in Detroit, and it seems like a lot of Detroiters are unaware of it as well. In a nutshell, the FHA refused to fund housing that were near "certain" neighborhoods (read: black [and to a lesser extent, Jewish]) so a developer built a 1/2 mile long, 6 foot tall wall between the "black" neighborhoods and the newer "white" ones. The FHA then granted funding to the white developments on the "right" side of the wall. (Blech. Makes me sick to even write this...)

I've lived in both the North and the South and northerners really seem to pride themselves on not being segregated, but come on -- it's a damned *wall* dividing black and white neighborhoods. So fucked.

In related news, my procrastination in writing this post paid off, because when I first read this book and looked up the Birwood Wall, I didn't find too much (the most information found in this article from 2011). Lo and behold, on May 1, there was an article in HuffPo about this very topic. So weird, right?

Detroit: City on the Move

The mayor at the time of the riots was Jerome Cavenaugh and his mention in the book reminded me of this awesome video produced in 1965, when Detroit was bidding for the 1968 Olympics. The first two minutes are kind of boring (just the mayor, talking about the history of Detroit) but skip ahead to 2:06 and just watch for a few minutes (the whole thing is pretty long) -- the 60s production values, the music, the narration... it's pretty good stuff (especially considering Detroit today -- oh, the high hopes!)

Well, I got sidetracked a lot there, reporting on all of my recently acquired Detroit knowledge (there's way more -- believe it or not, I'm trying to reign this in). I guess I am technically "from" here, but I don't feel that connection -- learning about this place feels all new to me (I left when I was 9, sooo...)

Back to the book! It was good. I don't think this write up gave it full justice, but I've talked enough. Some of the prose was a little long winded, but as "historical fiction" goes, it was a good story. As I said, not too surprising, but heartfelt. Of course, I think it would be a very different story as told from Curtis's viewpoint, but that's probably true of all stories, right? 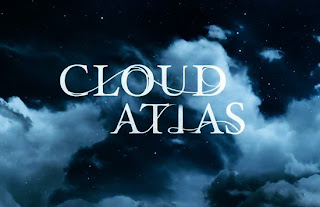 Boy, you were right about this one. What a great book. I have your copy, and it's in good shape since I read this one on my Kindle (thank you, school library overdrive!).

I know it's been a while since you read this, so I'll briefly recap. The structure of this book is fairly amazing: 6 stories, organized like a set of nesting dolls. I read the first section and when it stopped in what felt like mid-sentence, I actually looked up the book on Wikipedia. I was sure that the Kindle version had somehow gone kablooey. It was then that I discovered what I thought would be a major spoiler, but turned out to be okay, which is that as the stories move through time, it is revealed that the current character is reading, watching, or experiencing the previous story in the chain.

Hmm. Hard to know how to talk about this book.

I guess I'll start off by saying that I definitely enjoyed some sections more than others. I don't think it's because of their gender, but I would say that my two favorite sections were those that focused on Louisa Rey and Somni. Although, if I remember correctly, you don't like Hawaii all that much, so maybe that's not too hard for you!).

One of the most impressive things about this novel, I think, was the control the author was able to maintain over the voice of each section. I almost felt a sense of whiplash at the beginning of each new section: who is this person? When is this? What in the hell is going on here? So often, a book contains multiple characters and points of view, and yet it all sounds exactly the same. I thought I would find the structure of the novel annoying, but instead I found myself enjoying the puzzle of the story and wondering how it would all come together in the end.

I'm fairly certain that this book would hold up incredibly well under repeated reading. As it is, I'm sure that I missed some salient details and plot points. And there must be tons of foreshadowing in each section, pointing to what's coming next.

At some point last year, they made a movie of the book! I've heard it's not too great (It's almost impossible for me to imagine how you could even make a movie out of this book!), but I'm still curious to see it. Have you seen the movie?

I feel like this review doesn't quite do the book justice, but it's so complex and layered. What a daunting task.