Kelly's Book 8: Down and Out in the Magic Kingdom 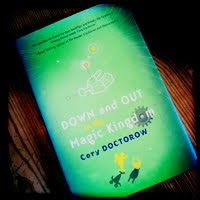 As I am starting this book late in the month, I am choosing the shortest book left on the TBR pile in hopes that I'll be able to finish it before the month is over. (Fingers crossed!)

This is another book I picked up on the book recycling shelf at work. I hardly know anything about it, except that it's Cory Doctorow's first novel. And the only things I know about Cory Doctorow are from reading BoingBoing.

Sooo... this one's almost a total shot in the dark. Other than the author, I know: it's science fiction, set in the future, and I've heard good things about it. That is the total sum of my knowledge of this book.

I rarely read books that I know almost nothing about. We'll see how it turns out for me. ;)

Completed (finally!): The Master and Margarita

This the first month I've fallen behind and did not finish a book in the allotted month (this was July's book... it is now August 13 -- I finished this morning. Oof.) I don't know why, but this book was a struggle for me to get through, and yet... I felt almost compelled to keep reading.

What is usually said about this book is that it is "two novels in one," but I would argue that it is even more novels (stories, at least) in one and that some of them were incredibly interesting to me and some were... not so much. Therefore, the interesting ones kept me coming back and the less interesting (to me, at least) ones made me want to quit.

The two main stories are:

1. The story of Pontius Pilate at the time of Jesus's crucifixion.
2. Satan comes to Moscow in the 1930s with his band of misfits and wreaks mischievous havoc there.

Both of those stories were interesting. It's the "side stories" that kind of wore on me.

The main stories are connected by an author (the Master): he has written a novel about Pontius Pilate in the days preceding and following the crucifixion and he lives in Moscow at the time of the visit from Satan (called "Woland"). He paints Pilate as an extremely sympathetic and tormented character, which I really enjoyed, because I don't remember hearing much about Pilate other than... Yup. He's the one who gave the go-ahead. When The Master and Margarita opens with the story of Pilate, it's not immediately clear that we are actually reading the Master's book -- we find that out much later in the novel, and that is incredibly well done. I love how Bulgakov ties all of the stories together, even when they seem unrelated.

The Master's lover is Margarita. Her story was my favorite by far and definitely sucked me back in about halfway through, when I was ready to quit. Woland (Satan) asks her to be his hostess at a yearly ball. She agrees and becomes a witch for the night, and her witchy scenes are very, very fun. The ball is grueling, but she does not break, so Woland grants her one wish. Her first wish is selfless -- that a woman who has been suffering in limbo/hell be relieved of her burden. Woland grants her that wish, but since it was for someone else, he gives her another.

The Master has been in an insane asylum and she asks that he be restored to her and that they may return to their basement apartment to be happy together. Woland is kind of skeptical that that is what she wants, but he gives it to her. The rest of their story is great... do you want to know how it ends? I don't want to spoil anything for you.

The less engaging parts of the novel came out of Woland's general havoc in Moscow... mostly, where Bulgakov turns things into a social commentary on Russia at the time. I don't really know much about Russian history -- the footnotes were helpful, but wading through the social commentary felt like a chore.

It's a bummer, because Woland's band of misfits were great characters, especially Behemoth -- a giant black cat that walks on his hind legs and seems to be featured on most English language covers of this book, although I'm mystified why he's frequently depicted as skinny, because he's clearly described as gigantic throughout the novel: 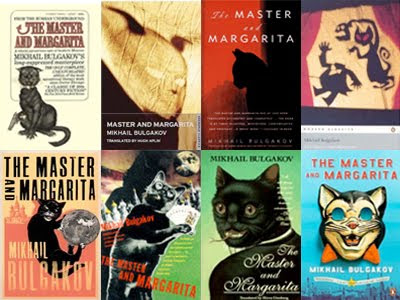 Of those covers, I feel like the final one really nails Behemoth -- he's a clown. An evil, evil clown.

When the novel simply focuses on Woland's crew and their antics, it's very entertaining... but getting into the nitty-gritty details of the people who were affected wore on me. I realize it was a social commentary and if I shared an interest in the issues that Bulgakov addressed, I probably would have been shouting "Yeah! Take THAT!" But... I was really only in it for the story/ies, so that part was skip-able.

Overall, the novel is masterfully written -- Bulgakov throws a bunch of seemingly unrelated stories out there and then weaves them all together artfully. As a story, I loved it. As a soapbox, it left me in the cold. I'm glad I stuck with it, although I could have skipped the (long-winded!) Epilogue, which basically gave me follow-up details on all of the lesser characters in the novel that I didn't give a crap about.

PS -- If you want to know what happens to the Master and Margarita (and I think you probably do), let me know in the comments and I'll tell you there... that way, anyone reading the post doesn't have to worry about the big spoiler!