The Tournament of Books is Here!

It's the most wonderful time of the year! The announcement of the short list for this year's ToB! This year's tournament has 17 books (I explained the play-in round to Darrell and he was cracking up.) and I've only read one of them! But, since I have the quarter off of grad school, I feel pretty sure I can get through a good number of them before March. And, even better, so many of the books sound interesting and I'm looking forward to reading them. And, in a fit of fantastic planning on my part, I hoarded all my gift cards from students and was able to purchase a bunch of these the ones that we didn't have in the school library. (Although my librarians are awesome, and I bet they will order lots of these.)

Let's take a look at the field.

Read
You and I have both read Fates and Furies by Lauren Groff. I was certain this would make the short list. It was just the big, buzzworthy book of the year. We've discussed this a lot already, so I'll just go ahead and say that I think it will be great for discussion. 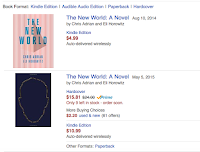 I downloaded The New World by Chris Adrian and Eli Horowitz. We talked a bit back and forth about this one. Apparently this was only released as a digital book, and that first version was available on kindle for $4.99. But you discovered they had also published it as a hardback, and that version is $10.99 on Kindle. The world is a confusing place, Kelly. So far, I can't really figure out what makes it interesting as a digital only publication. It's weird. Might require some research on what the story is there. As for the actual story, it is told in alternating voices: Jim, who dies suddenly but is experiencing some sort of afterlife. And his wife, Jane, who is pretty upset that Jim contracted with some nutball group to cut off his head after his death in order to bring him back to life. So. Yeah. Interesting premise for sure.

Library, baby.
I got two books from the school library. The Sellout by Paul Beatty and The Sympathizer by Viet Thanh Nguyen. I read the first page of each of them, and they are both first person narrators. I'm a little burned on that right now. So I'm going to wait on those for a while.

Amazon Prime
As a thank you for the Fates and Furies book talk, I got a $50 Amazon gift certificate! Perfect timing. I also had some other Amazon credit I had been hoarding. I ordered Avenue of Mysteries by John Irving and A Spool of Blue Thread by Anne Tyler. My guess is that I'll read the Anne Tyler after The New World. Obviously the play-in round is first, and we're already in the middle of another John Irving. So maybe save Avenue of Mysteries until later in February? I really like Anne Tyler and read a bunch of her books in college and my early 20s. At some point, I stopped reading her, I remember feeling like she had a shtick and I was tired of it....but, I can't remember what that shtick was anymore. I hope it will feel like hanging out with an old friend! I also ordered The Invaders and Bats of the Republic, and I know nothing about either of them except for the descriptions on the ToB site. Finally, Oreo by Fran Ross. I am super interested in this one, and if I had to make a prediction from the long list, I was hoping this one made it in. I have a feeling this will be pretty high up in the batting order, too. 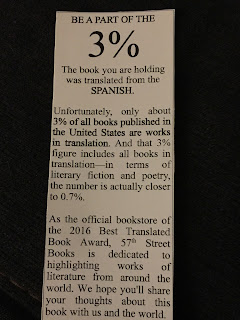 I had a $100 gift card left, and I really wanted to support my local independent bookstore. I went there this afternoon with the plan of just getting whatever I could find on the list. And they had Our Souls at Night, The Story of my Teeth, The Tsar of Love and Techno and The Book of Aron. Can we talk about how freaked out I am by the cover of The Story of my Teeth? Teeth freak me out. I'm worried about that one. But, look at this interesting bookmark that was inside of it! I guess that should inspire me to read more literature in translation. The only recent read that I can think of that qualifies is the Ferrante quartet I just finished.

And because I just spent the whole day at that superbooktalk, I also got The Wrath and the Dawn, a retelling of the Shahrazad story for a YA audience. I'm lucky I got away with only one non-ToB purchase. Bookstores=danger.

Already Own It and Dreading It
A Little Life. Obviously.

Coming out in Paperback
Both The Whites and The Turner House come out in paperback by early March. I can wait for that.

Beg or Borrow
Ban en Banlieue. I just couldn't get the Powell's site to load. I'll figure out how to get it from someone.

Is that all 17? What about you? Any sound interesting? Any audiobook insights?
Jenny

Joint Book 1.16: The World According to Garp 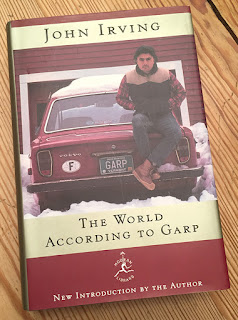 Earlier this year, as we were bemoaning a few WMFuNs we had read, we got to talking about The World According to Garp and that it's a WMFuN but that we remember loving it so much. And we wondered if it would hold up for us, since we both read it when we were younger (you said it was high school for you, I read it the summer after my freshman year of college. So... 18 and under.)

So we decided to re-read it together this year as one of our joint reads and see if, in fact, it has held up.

Here's our reading/discussion schedule:
When I first read this book, I remember finishing it and thinking, "That was one of the best books I have every read." Instant favorite! Other than this one, I have had this experience with One Hundred Years of Solitude and The Great Gatsby. And, when I was very young, The Lion, The Witch, and the Wardrobe. All of these books remain favorites for me today.

My copy (pictured here) is pretty cool -- it's a little 20 year anniversary hardcover published by The Modern Library in 1998. It's a fun "chubby" size -- the cover is not much bigger than a trade paperback, but the book itself is thick. And that photo on the front is a young John Irving with his "GARP" license plate. Ha! I spotted it about 10 years about ago at Powell's and snatched it up cause I thought it was cool. For the most part, I'm not a book "collector" but if I see a cool version of a favorite, I'm grabbing it.

While preparing for our read-along, I also looked for this book on Kindle (easier to transport and read on the go) but it's... not... available... on... Kindle. What?! Feels like a very long time since I last experienced that roadblock -- and it's especially odd when many other Irving books are available.

I also looked into the aBook but it has the absolute worst narrator! Seriously -- some terrible super-flat monotone. Ugh!

Sooo... it looks like I'm hauling my chubby little hardbound copy around with me this month. Oh well. At least it's for a book I love.

This is our sixth year of committing to reading books from our To Be Read (TBR) piles and talking about them on this here blog. (Our lists from 2011-2015 can be found over in the sidebar.)

Last year, we picked four books to read and discuss at the same time. We enjoyed that, so we're doing it again. This year's joint selections were semi-random, but ended up being two re-reads (Garp and Beloved) and two "How have we missed these?" reads (Five Children and Housekeeping).

Here is the schedule for our shared reads:
Additionally, we each have each chosen 10 other books from our TBR piles all with copyright dates prior to 2015 (forcing us to dig deep on the shelf). Here are our complete lists for 2016...


Jenny's Books
Here is a screen cap from Shelfari of the books Jenny has chosen:

In alphabetical order, they are:

Kelly's Books
Here is a screen cap from Shelfari of the books Kelly has chosen:

In alphabetical order, they are:
We each have a total of 14 books on our lists -- 12 for 12 months, plus two alternates, just in case we cannot stand a couple of them. Again, four of them are shared books that we will both read in our designated months, as noted above.

As we finish them, we write about them here (Spoiler warning: we are spoiler-iffic with the spoilers) and then we cross 'em off of this list by linking to our reviews/reports.

Credit where it's due: We originally started this project in 2011 by participating in the TBR challenge hosted by Roof Beam Reader -- Adam is no longer hosting these challenges, but we still thank him for inspiring us to start this thing up.