I know we have The Night Manager on deck for July, but I ended up feeling a little panicked about the back half of the year. As it turns out, I'm going to have to take 2 classes in the fall quarter, and I thought if I could maybe be ahead of the game, it would be better. 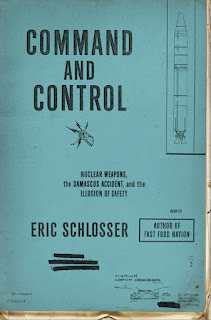 The first week of summer vacation, I read a bunch of books---along with The Shining Girls, I read at least 4 or 5 others. SO SATISFYING. One of the books I read was called Voices from Chernobyl, which is an oral history of those who survived the disaster. Um. Harrowing. But, it also reminded me that I have another nuclear book on this year's list, Command and Control: Nuclear Weapons, the Damascus Incident, and the Illusion of Safety by Eric Schlosser. I was also reminded of this book when I read another nuclear-themed article in the New Yorker by the same author.

I had picked this up in March and read the first 30 pages, but then the rest of the school year happened and I just never got back to it.

I've read about 150 pages so far, it's very readable and fascinating. I hope to finish it this week before starting The Night Manager.

Any ideas about our plan to tackle that one?
Jenny
Posted by Jenny at 8:49 PM 4 comments:

What are we to make of the time-travel trope? Obviously, it speaks to very real desires, perhaps the most human desires of all: to know what will happen and to fix what has happened. I can trace my love of the time-traveling genre pretty much straight back to 1985, Marty McFly, and a time-traveling car. Of course, there was also A Wrinkle in Time, but the thing I remember the most about that book was a giant, creepy brain at the end. [You know, we should reread some our favorite childhood books here, saying what we remember from them, and then read them and see if we were right.]

It's funny, though, although I like time-traveling movies, as a general rule, I don't love time-traveling novels. The only real exception is Long Division. (Although I do remember a bunch of hilarious time-traveling romance novels that I read a long time ago. Memorably, in one book, after deciding to stay in the past with some stud muffin, a woman sends back to the future for tampons and Advil. Lol.) I think the time-travel genre works for me when it's "fun" rather than serious. Obviously,  Long Division wasn't a "fun" time travel book, but it was saying something profoundly interesting to me about race and growing up in America. The only other time-traveling book I have a strong memory of is The Time Traveler's Wife, which is a book I never finished. People loved that book! But it was so meh for me.

One thing that's interesting to me about time-traveling books is that I have a lot of patience for mechanicians of the time-travel plot. I mean, a DeLorean fueled by banana peels or 1.21 jigawatts? GREAT! I mean, obviously none of it makes any sense, so I really don't usually worry too much about that---as long as the story doesn't try to hard to explain it, I'll be fine with it, too.

That brings us to The Shining Girls. Honestly, Kelly, it was fine. It's the story of a serial killer, Harper, and his ability to travel through time by aid of a magical house in Chicago.

The house is filled with Harper's "treasures" that he steals from one victim and then places them on another one later in time. The house calls to him, showing him his present and his past.  I now have given you as much explanation for how the time-traveling works as the author does. As it turns out, it is possible that there can be too little explanation for me. I mean, at least 1.21 jiggawatts is about power! In this book, the house works, catapulting Harper and a few others through time, but there's never real explanation of how it works. Not even the smallest amount of explanation. I guess it's because Harper himself doesn't care that much, but it's not satisfying.

The other protagonist of the story is Kirby, a girl he attacks and stabs, but she manages to survive. Kirby is determined to figure out who tried to kill her, and she is the one who discovers the secret of the house.

I'm not sure what my problem was with this book. It's serviceable, I guess I'd say. Kirby is an interesting character, and I admired her. She's a fighter and she is determined to figure out what has happened and why. I think the problem with the book is Harper. He's a serial killer, but it's unclear why he does what he does. It's also unclear what brings his victims to his attention. The only explanation we get is that they are "shining" that there is something about the way he sees their aura that draws him to them. But honestly, it's pretty thin.  If the killer isn't creepy and well-formed as a character, it's hard to find the book all that scary. The thing that works the best is that Harper both kills the women, but then goes back and sees them as children, and goes back after to read the reports of what happened in the news. But his motives and reasons for acting, the explanation of his methods, why he limps, who his family was...NOTHING!

I mean, as a book, it was *fine* and I enjoyed reading it, but I think it's going to have about zero staying power.

One last thing: I read this on my Kindle, and that was a little frustrating. As Harper went back and forth in time, I found myself wanting to flip back and put the chapters in order. But the Kindle defies that sort of activity. Meh.

Tl;dr version: If you're looking for a quick read, go for it. It's a solid, but not spectacular read. 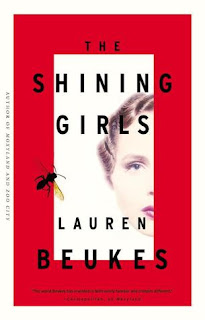 Every once in a while, I make the mistake of buying a bunch of Kindle books all at once when there is a sale. This is one of those books. I think it was some sort of special sale, because this is a pretty new-ish book, published in 2013. From what I could tell, it's about a time-traveling killer that's set in Chicago. I think the Chicago thing was probably the hook for me. I like a creepy book, but the last book I read about a time-traveling serial killer, NOS4A2, was so fucking scary, I have never finished it. I keep thinking I should finish it, but then I think about how scary it was... I don't know. Maybe I'll read The Shining Girls as a way of leveling back up to that one!

Here's the reason I say that buying a bunch of Kindle books is a mistake. Unlike pBooks, eBooks don't remind you that you exist. They just...linger there, waiting for you to remember you bought them. I guess I should spend some quality time this summer organizing my Kindle books into folders, but it's such a pain creating and making collections or whatever. However, now that I think about it, maybe that's easier to do now than it used to be. It's been a while since I fooled around with it. I think the easiest way to do it would be *from a computer* rather than the actual Kindle! Maybe I should check it out. Hmmm. Do you keep your Kindle books organized?

All right, it's summer. Time to read. Along with my planned TBR books, my book club book, I also scored a rather intimidating stash from the library. I mean, I obviously won't get through all of the 12 books I checked out, but I like to keep it aspirational!

My book club is tonight. The great news: we read Station Eleven for this month. I started to re-read it but don't feel a whole lot of pressure to get through it all. I read it so recently! Sometimes I take the ToB cheat, which is to go back and re-read the commentary as a way of refreshing myself. Hah! Either way, so far it's been just as enjoyable the second time around.

Here's the dilemma part: the host pitches a few choices for the next month's book. And since this month's book club is at my house, I have to think of which books I'll suggest we read next. There's really no constraints: it can be new or old, it can be fiction or non-fiction, it can be something I haven't read that just sounds good! [I say that because in my California book club, someone had to have read the book in order to recommend it. And, it had to be out in paperback so it would be more affordable or likely to be a the library.]

Of course I have no idea what books to pitch. I mean, obviously, I have too many choices to count. When I told my husband I was worried about this last night, he totally gave me the side-eye. Hah! Should I offer up some adventure books---about surfing or mountain climbing? Should I be sneaky and recommend a book that I put on this year's TBR list? Should I just pick something that I've read and loved? Should I pick a classic I've always meant to read, but haven't quite gotten to yet? Should I go get something new that sounds interesting to me? I actually hate making recommendations! The pressure!

How does your book club pick books?