Completed: About a Mountain

Your "Holy Shit, It's September!" post has prompted me to catch up on some reading and writing here. By looking at my list of books I've read in 2016, you'd think I haven't been reading at all. Not true! I've just been reading romance novels, and I don't keep track of them. And I'm fine with it!

Anyways, I picked up About a Mountain a few years ago when my friend Lori mentioned it. It seemed it would fit right into my tiny little nuclear niche because it's about the plan to turn Yucca Mountain into a nuclear waste repository. 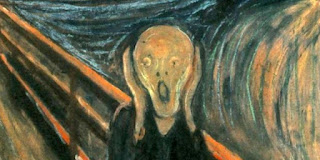 Honestly, this was sort of a weird one for me, mostly because it wasn't what I expected. I thought it would be a pretty straightforward examination of the Yucca Mountain site, and it was more like the philosophical stylings of the author when thinking about the mortality of humanity and of the Earth. So, although I did learn some about Yucca Mountain--how it came to be the site, the legion of problems with it, its unsuitability for long tern nuclear storage, the massive transportation problems of moving the entire nation's spent fuel there---it wasn't really as much as I would have liked. Instead, there were a lot of digressions, some of which were pretty interesting. By far, the best was the discussion of how a nuclear storage site could be "labeled" with appropriate signage so that future generations could recognize the danger without counting on language. Answer: carve Edvard Munch's The Scream into granite plates. Mmm'kay. That seems like it would work, actually.

Other parts of the book didn't work for me at all. For example, there was a whole other section that talked about how Vegas is the suicide capital of the world, and although I'm sure the author was going for some super interesting framing setting up the suicide of individuals as a metaphor for the suicide of humanity as a species...but really, it was pretty fucking tedious. Finally, the author was super into list-making as a rhetorical device. So when he talked about what would happen if a nuclear disaster hit Vegas, he described a list of what would be destroyed, over a couple of pages, and I get that he's hoping to create a cascading fear and realization of how it would all play out. But in 200 pages of text, he pulls this listing maneuver at least 20 times, and all it created in this reader was a cascading feeling of annoyance.

Meh. Not really the kind of nuclear read I'm interested in. Maybe it's because every nuclear book I've ever read creates that feeling of dread and dismay at humanity's stupidity all on it's own. Here, the author's attempt to hit me over the head with it just didn't work.