I feel like I am the last person on the planet to read this book. It was extremely popular when it first came out (1998) and I feel like I have heard every reader I know talking about it. Now I know why -- cause it was really good.

Took me a little while to get into it, but once I did, it was definitely one of those "I cannot wait to get back to reading this!" books. I won't bore you with a plot summary -- I know you (and everyone else) have already read it. The story was engrossing and what impressed me the most was that it was told with 5 different voices and each one of them was *so* distinct... I could literally open the book at any place and know exactly who was "speaking." That's impressive.

I didn't really know much about the Belgian Congo/Zaire/Republic of Congo, etc. when I picked this book up and, since reading it, I have spent some time learning. Like much of world history, it is interesting but heart-wrenching (perhaps that is why I can't get into history -- I'm too soft. I can't handle the truth!) and this book did a good job of following a difficult time in the history of that place with a personal heart-wrenching tale. The domestic issues of this dysfunctional family played well against the larger national issues going on around them.

I was so happy when the mother finally just bailed on the crazy preacher father, although I was sad that it took the death of their youngest to be the catalyst -- I guess she finally found out what the "last straw" was for her. I really enjoyed all of the different "lenses" of the book -- the shallow oldest sister truly did come across as being totally shallow and dumb from her own perspective (even misusing and misspelling words) and to view her from her sisters' point of views only confirmed that.

For me, the only real misstep in this book was... the end. Which is a rather common issue, right? I wonder what percentage of books really do stick the landing for me. Perhaps I should start making a notation next to books -- StL or not? This one did not.

I was not terribly thrilled with going all the way through with their "future selves" (the injured twin becomes a doctor and manages to heal her life-long physical ailments, the other twin stays in Africa and manages to reunite with her husband after a long jail sentence, the shallow oldest sister runs a hotel in Africa for rich white men and manages to succeed at that endeavor, the mother finds peace growing flowers...) but the nail in the coffin was the "observations" from the dead youngest sister of their lives and her afterlife. After such pitch-perfect narration throughout, this tacked-on ending was a little bit disappointing to me.

However! It's been over a month since I finished this book and I barely remembered that problem with it -- if I hadn't marked the pages to write about on this very blog, I probably would have blocked them out already and been left with the general feeling of: "I enjoyed this book."

And there! Another post done! (Still not sure why I have struggled so much in 2014 to write these posts, but oof... I have many more before I am done.)

PS -- Back on the acacia tree sunset treatment observation -- click that link and notice the last book.  Is that.... The Poisonwood Bible? Indeed it is!
Posted by kelly at 10:21 PM 3 comments: 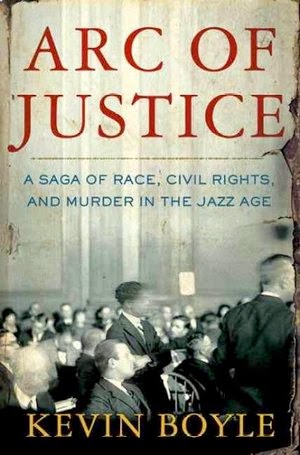 Yes, yes -- I still have 4 other posts to write. But I also have 4 more books to read, so let me write a preview post on one of those: Arc of Justice by Kevin Boyle. I am about 40 pages into this book and just wanted to jot down some thoughts before I go any further.

First of all... I thought this book was fiction. Really paying a lot of attention to these books, eh? Sheesh.

My mother-in-law gave it to me a few years ago when it was the "Great Michigan Read" for 2012 (kind of a neat idea -- the whole state is essentially in a giant year-long "book group" together where everyone reads a single book written by a Michigan author). I've never participated in the "Great Michigan Read" but for some reason, I thought all of the books were fiction. They're not. This book is not. Nope. It's a true story.

We've talked before about how I don't read much non-fiction, so I am laughing at myself that I chose a book I thought was fiction but it's not. (Also! I have just realized the 4 of the books I have read this year are non-fiction! How did that happen?! Maybe that is why I am struggling to write about them? Hrmm.)

Didn't take me long to realize this was non-fiction -- the endnotes were a dead giveaway. (Ha) Aaaand they're also kind of annoying -- I always feel compelled to stop my reading and go straight to the endnotes. But in this case, they are literally *all* just sources, so I have done a good job of skimming straight over them. Go, me!

The subtitle (long subtitle -- another giveaway that this book would be non-fiction, right? Duh.) is " A Saga of Race, Civil Rights, and Murder in the Jazz Age."

It's a story about a black doctor who moves to an all-white neighborhood in Detroit in 1925, and then all hell breaks loose. I've actually already read that part, and it was difficult. Pretty much exactly what you would expect to happen, happens: Day after he and his family move in, a mob of white neighbors gather outside his house. As tensions mount, someone throws a rock through the window and one of his friends fires a shot into the crowd, killing one white person and injuring another. He and everyone in his house are immediately arrested and taken away. It's a bad scene. (And made me think "1925 or... 2014?" Which is just f*cking depressing.)

Once I realized this was non-fiction, I recalled that I actually do know some of this story. The man's name is Ossian Sweet. As I recall, against all odds, he was acquitted. I'm curious now how that all goes down because, honestly, it seems like an unlikely outcome.

As a side note, this book also won the National Book Award in 2004 and was a finalist for the Pulitzer Prize. Sooo... has everyone and their brother heard of this book while I'm all, "Oh, my MIL recommended this book to me so I guess I'll read it. (La-la-la...)?" Probably. And now the Internet knows. Heh.

I like this status report thing. Keeping me honest. Hah!

Well. My plan to "listen" to Postwar is a total and utter failure. I basically feel like I have been listening to that sucker *forever*, and then today went to check my progress in the actual book to find out that I am only about a quarter of the way through it. Argh!

I think there are a few problems. One is that the material is just too dense for an audiobook. I'm having trouble keeping track of all the facts and figures, etc. Also, I don't love the narrator and find it sort of hard to listen to for long stretches.  I am sort of annoyed by how I notice the change in audio...I don't know how to describe this because I don't have a great vocabulary for it. But, I can tell when the recording switches, as if he's reading on a new day? There's not smooth transitions and sometimes it's a little louder or softer or his pacing seems different. There are obviously lots of foreign names and places, and I can tell that he went back later and rerecorded just the names. It's super distracting. I think I have to abandon the audiobook plan. I'm honestly not sure where that leaves me. Maybe I'll just try to knock out a few chapters every week with the goal of finishing it by the end of the year.

I also abandoned one of my books this year, Snow by Orhan Pamuk. Presuming I can finish Postwar, that means I have to choose 2 out of the remaining: Please Look After Mom, All the Names, or The Thousand Autumns of Jacob de Zoet. I'm thinking it's going to be All the Names that's left on the road, but we'll see.

I'm at that point in October when I really want to wrap it up and thinking about next year's list---so excited we're making plans for that!

Maybe I just need to read a little more Postwar today to feel that sense of forward progress.
Jenny

2014 hasn't gone quite as smoothly for me as our first few years of doing this and I'm not sure why.  I've been reading, but I've been getting bogged down posting. My last status report was in June. I have since read all five of those books, but only posted about 3 of them. So let's see how it's going...

You already know about these, but hey -- I gotta pat myself on the back for getting something done around here!

I have finished all of these, but still need to write about them:
If I write one of these per week, I can be done by the end of October -- that seems doable, right? Sure.

I am reading two books at one time right now (the Baker is essays, so I spread them out) and they are:


Have not even started: 2

I'm not 100% sure what these will be yet, but I think I finally have to give up on Don't Know Much About History. After February, I did not stick to my "chapter-per-month" plan and since I've been on a crusade to "abandon books with abandon" this year (I have abandoned 9 books!), I think that's got to go.

After that, the longest page count is Stones from the River, so I'll just give it the boot right now. That leaves:
(Unless I cannot get through one of those and then I will bring back Stones.)

I have, once again, done a year-end page count and I have to read a little over 15 pages per day to make it, which is totally doable (there are 90 days left in the year today, FYI). The key is the writing! Aaaaand yes, I do realize I have just spent 30 minutes writing this "status" post... aaaaand I could have been writing a book post instead. Whatever.