Holy Sh*t! It is [almost] October!

WHOA. What the what?! It seems like just yesterday that I wrote my Mid-year Status Report but that was, in fact, 3 months ago. And since that time... I have not made much progress. Eep!

So far this year, I have completed four books and read two more that still need posts (Same two that were on my list in June. Really. I am stalled out.) That means I have six books to read in the final three months of this year. Did I already say "Eep?" Yeah. Eep again.

Time for the time-honored tradition of... page-counting! But looking back to my post about this from last year... I am actually right on track for panic-page-counting in late September/early October. I guess that's part of being a life-long procrastinator -- forgetting all of the times that I've been in a Procrastination-induced Panic before. HA!

(Cause I've actually been in worse shape before, if you can believe it!)

Here's what's left to read, plus Hitchhiker's Guide (I loaned it to someone... not sure if/when I'll get that back) and Housekeeping (you and I are reading this together in December -- I have the eBook): 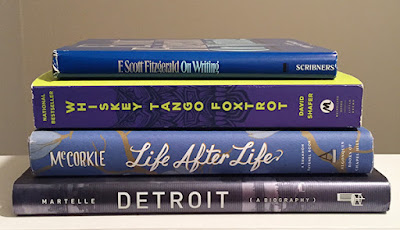 Which is NOT that many but... I just have not spent much time over the past few months reading books with my eyes and I'm kind of... out of the habit, if that makes sense? I have have listened to a ton of aBooks this year, but I have not done much traditional reading.

In fact, I may have to go ahead and listen to a few of these. Hitchhikers is narrated by Stephen Fry, so I bet that's terrific... yeah. I'm totally going to listen to that one. Heh.

I know this is a busy time of year for you, so no pressure. Buuut... how you doin'?