Kelly: Let’s start with how we got this book. It was in a box from Quarterly, curated by Book Riot waaay back in 2014. The entire reason I bought the box was to get the BOOKS hat, as seen in the photo below -- this is a screenshot I just took from the Quarterly website. (Note: Mr. Fox is also in the photo.) 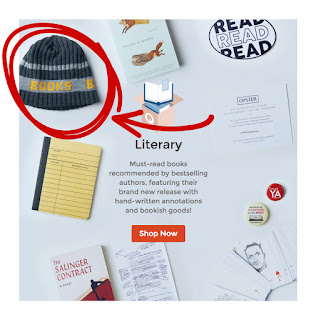 The hat wasn’t available then in the Book Riot store, so that was the only way to get it [it was briefly available a year or so ago but… it’s now gone again!] So I bought a box of books just to get a hat. Yup. And I bought one for you too. Yup. So that’s how we got this book. Which actually looked pretty good. Until we read it. And then we said WTF.

Jenny: I honestly don’t even know what to say about this book.

K: When we decided to read it, I was packing to move, so I went for the aBook (aBooks generally make good “mindless task” companions). I started listening, got about 20 min in, said, “Wait… what’s going on?” and restarted the book. Sometimes it takes a 2nd try to “get into” a book (especially if I’m distracted). I tried twice more with no luck, so I gave up. After we moved, I picked up the pBook and discovered… Oh! It’s just a confusing book!

J: Just last week I was talking with my students about strategies when you’re reading something that’s hard. And one thing I tell them is that you kind of have two choices: hurry up or slow down. Hurry up means just keep powering through and sometimes it starts to make sense. Slow down is when you know you weren’t as careful, and it’s time to reread. In this case, I decided to hurry up and just keep going. I think I read a lot of this book hoping it would eventually come together, but I don’t know if it ever did.

K: Yes! I felt like I tried “slow down” 3 times and then… “hurry up” the final time but… neither technique ended up working. Reading this book felt like walking into a movie that had already started. But, then one usually has some sort of “Oh, I’m getting it now” feeling at some point. Not with this one, though -- it felt that way the whole time.

J: It only got better for me when I decided to just read it as a metaphor, as symbolic. If that’s the case, then what can I get out of it? The best part, then, was when Mary confronts Mr. Fox about his novels, basically that his fiction makes the unreasonable and obscene seem normal. It was just impossible not to read this and think about patriarchy in general, but the past year. The normalizing of fascism and Nazism. It was fucking depressing.

K: For me, I think the “got better” part of it was focusing on individual stories throughout the book and kind of glossing over/ignoring whatever the hell was going on with the main story [Like: what is Mary? Is she a real person? A figment of his imagination? Whaaaa…?]

For instance, that story about the school to create “world class husbands” was killer. I loved this line:


“...your grade depends not on the answer you give but on the tenacity with which you cling to your choice. You earn a grade A by demonstrating, without a hint of nervousness or irritation that you are impervious to any external logic. You earn an A+ if you manage this while affecting a mild and pleasant demeanour.” [120]

Oh, the satire! The fucking sarcastic take on what makes a “perfect husband.” Brilliant.

J: I would not have come up with the Bluebeard connection on my own. I only clued in about halfway through when I saw the acknowledgements page.  Even then, I only had the most vague knowledge of the Bluebeard story. So then I looked it up on Wikipedia...and, honestly, I’m not sure it helped me much.

K: I thought I was unfamiliar with the story of Bluebeard but once I looked it up, I realized… yeah… I know that story... (just not knowing that the story was that of “Bluebeard,” if that makes sense). Regardless… I don’t really feel like this story was that Bluebeard-y. Fox is killing fictional “wives” and I’m pretty sure his actual wife knows about them the whole time (I mean, unless she doesn’t read his work?) I don’t know.

J: One thing I keep wondering is who is the intended audience for the book? It’s obviously very literary, mythical almost. Who is that appealing to? At this particular point in my life, it’s not really me. And I kind of felt bad about it. I know I didn’t really give this book my 100% full devoted attention. It didn’t feel like it was for me, and if it wasn’t for the fact that we were doing it together, I definitely would have DNF’d this one.

This is the first time in a long time I thought about cheating and reading reviews to help me make sense of the book.

K: Did you read reviews? The final story (where a fox… sort of turns into a human… I think…?) kind of reminds me of that book where that woman turns into a chair or some shit like that.

J: THE PARTICULAR SADNESS OF LEMON CAKE. Ugh. I’m looking up reviews now, and honestly, I’m not sure they know what to make of it either. Here’s a review in the New York Times talking about how great it is. OH! And I just noticed that it was written by Aimee Bender, the author of PSoLC. OF COURSE.

K. Ha. It all comes around full circle, eh? Sooo… I mentioned this before as something I sort of shuffled to the side, but… do you think Mary is real?

J: I don’t know. Maybe she’s Daphne? The thing is, I didn’t care enough to do the work to find out what was going on. You used the movie metaphor earlier, but the experience of reading is like swimming in the ocean. I’m just riding the wave of the language, but not stopping to examine much. If I did, I’d probably drown.

K: Well put. I must say, though, that the language in this book is lovely. Check this passage:


The first moment in the tomb was the most forbidding. The silence, the stillness, the dark.

Then they realised: They were together, and there was no one else. She felt his lips tremble against her forehead. After that he became courageous and brought his arms down around her. He kissed her closed eyelids and he kissed her mouth and he kissed handfuls of her hair and he kissed her elbows. She placed her brass ring on the palm of his hand and closed his fingers around it. He opened his hand and the ring was gone. It had not fallen, unless it had fallen through him, and if so, it had left no mark. No more counting kisses.

Reynardine had thrown a candle and a box of matches in with them. They didn’t need the candle... In the darkness they learnt to waltz. Then they lit the candle anyway—why not? And they let its flame warm their stone house for a little while as they danced on behind their locked door. [108]

J: Yes, I would definitely agree with that. Her language is lush and rich. I enjoyed that part a lot, but it still felt slippery. Beautiful language alone didn’t give me enough to hang on to.

K: Oh, man… this review on Goodreads is perfect: “This book is so capital-m Meta that it's probably illegal to write a review of it.” HA! Sometimes I like a weird book, but this one didn’t really work for me.

All right! I'm publishing this on the last day of 2017. Gonna hit up Dream of Perpetual Motion now and then we'll turn our attention to 2018!
Posted by kelly at 11:56 AM 1 comment: