Joint Book 2.16: Five Children and It 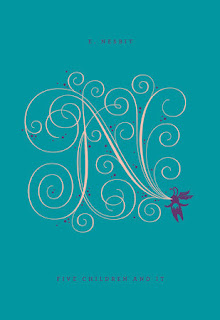 Well, it's already April 6 -- time to talk about reading this little weirdo!

I first spotted this book at your house, as it is "N" from the Penguin Drop Caps series (as seen to the right there). We had heard of all of the other books you had in this series (I won't name them here, as they spell out your last name...) but this one? Nope. Neither of us had ever heard of it.

So I looked it up, found out it's supposed to be a children's "classic" and I suggested we read it together for our little blog.

Further reading about this book tells us that it was first published in 1902 and, according to Wikipedia, has never been out of print. Whhhhaaa---? How have neither of us heard of this book?!

And I thought it was going to be one of those things where we had never heard of it before but then, after we talked about it, we'd hear a bunch of people mentioning it... Nope. Haven't head a peep. This book's a mystery.

So! Let's get reading!

I am concerned about my tolerance for a book written in 1902. Hopefully being a children's book, it will be easier to take?

Completed: The World According to Garp

Oops. Slow start to reporting this year... my bad. We actually finished this in January, but then my world kind of imploded in February, so I haven't been great about focusing in 2016. Buuuut... here I am!

Basically, this book held up. We weren't sure if we would feel the same way about this WMFuN 20+ years later, but it was great. I kinda just want to end this review there, but we said some other stuff when we were reading it, so I'm going to jot down my notes here (I was going to try to arrange this into something coherent but it's now April, so let's just get this done)...

Kelly: I remember this being a WMFuN novel, but so much of this has focussed on Jenny (his mother)

Kelly: Doesn't he get his penis bit off?
Jenny: What?! I don't remember that. Whhhhat?!
[This ends up being Garp's wife biting off the penis of her lover when Garp rear ends his car.]

Interesting note about John Irving -- he always begins novels with the last sentence. (We speculated about how that works for awhile. But hey, we're not John Irving so what the heck do we know?)


Kelly: We're getting to the WMFuN'edness now.
Jenny: I don't know -- Irving can write anything and I'll love it.
Kelly: Um, seducing the babysitter?
Both: [...]


And then my notes devolve into truly random chatter about the book. I'm sorry. I should have written this down months ago! Here's what I've got:

Garp plays a traditionally "feminine" role in their household but never thinks anything negative about it -- he is the product of Jenny's views of "feminism." One theme from this book: You are just a product of your parents and your situation.

The story of the Pension Grillparzer: we thought it wasn't going to be good cause it's a book within a book, but... it's really good. Of course. It's Irving-within-Irving!

Irving's gift is that he writes a straight narrative with weird people and situations. He's a keen observer of life: People are weird. And he doesn't flinch from that.

It's so moving that the "reveal" of the son's death is delayed in the story for so long. You know something terrible has happened, but you don't know the details and it gets tougher and tougher as it goes on and you suspect what has happened. Jenny: Especially after the "forecasting" (more than "foreshadowing") that the son is going die leading up to that scene.

[I wrote down the following sentence, but I have no idea what it means]: Who is responsible for the gear shift? The war.

I have not done this book justice. But hey -- it's logged. We're movin' on!