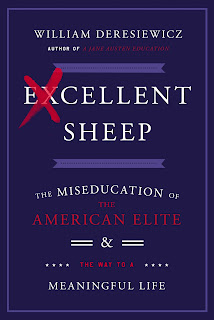 I never wrote up a preview post for Excellent Sheep, but I'll just give you a quick overview of how this came to be on my shelf. The HOW it ended up there is pretty easy: My friend Liz is a college counselor, and she and I talked about reading this book together a few years ago when it came out...but then things fell by the wayside and I never got around to it.

The WHY for this book is pretty obvious by just glancing at the subheading (which, come on, dude, get ahold of yourself!) says it all about why it would be of interest in my particular field: The Miseducation of the American Elite and the Way to a Meaningful Life. The question of whether or not kids are prepared for life and college is pretty relevant to my current line of work because of the school I'm at and the families we serve. Even then, the word "elite" makes me cringe, but this is definitely a  book that is marketing itself to a particular class of people. Whatever.


Basic premise of the book: Super rich parents are churning out kids who are automatons who only want achievements that are determined by their parents, and they are unable to think for themselves. They are afraid of failure and don't know how to take risks. They've been taught that achievement is the only thing that matters.

My thoughts on this book are pretty muddled, honestly. But that's probably because the book itself is pretty messy. My biggest complaint is that the author doesn't seem to have that much control over himself---he is constantly shifting the audience he's addressing. At times, he addresses young people directly, urging them to think for themselves and do what they want. But it's such a bizarre fiction. No *kid* is going to read this book! It's all finger wagging and smugness. I mean, how could any kid take seriously the "don't worry so much about where you go to college" from a guy who works at the Ivy League?!?! Then there are the times it seems his real audience are these controlling, wealthy parents---but even then, are they reading this book? They don't want to hear what they're doing is wrong. If a parent agreed with the premise of this book, they probably would have no reason to read it! And if a parent disagreed with the premise, they'd never bother with it. It's preachy! I honestly think the *real* audience for this book are for the faculty of exclusive colleges. It's sort of this back-slapping reassurance that parents and society are the real bad guys, instead of having the faculty and administrators of exclusive colleges look at all the ways they enable and benefit from the college admissions arms race.

Honestly, this book was sort of annoying. It's not that it's bad---it's just that it's all rehashed. The question of what we're raising our kids to do is a fascinating and important conversation, but this book didn't feel like it made all that many interesting or even new points. I could name other books that cover the same territory and seemed more urgent, revelatory, or interesting.

Completed: Five Children and It

We read this book forever ago, so sorry for the late (and maybe brief) recap of our conversations. I 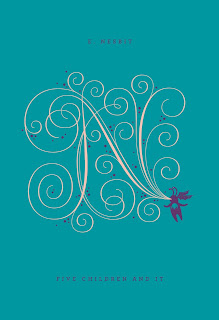 like when we have our little video conferences about the books we read, but it does make it harder to do the write up. I just feel like saying, "Remember that thing we talked about? Yeah. Wine!" Lol.

As you know, even though this book was one I owned for decorating purposes, you suggested we read it. How could it be that this children's classic, which had been in print for 100 years, is something we'd never heard of?! In fact, when I went to check it out from the Chicago public library on Overdrive...it was already checked out! People read this thing, and then we did, too.

I think we were both worried about a hundred year old children's book, but I must say, this is probably the most pleasantly charming cold read I've ever done. The plot is pretty simple: five children go exploring one day and come across a magical creature at the beach (the It), and he has the power to grant one wish every day. Every chapter is a different wish---wishes that of course go completely wrong from what the wishers intend. However, as the sun set every day, the effect of the wish disappears. Those poor kids never seem to learn their lesson and just keep going back for more wishes, though!

Here's some things we noticed...

Childhood and parenting
Lots of differences in the portrayal of childhood. This just isn't a time when four kids would be allowed to wander all day and take a baby with them. There was also some pretty interesting observations about city kids vs. country kids that have also totally changed. It's hard not to wonder at how we think differently about what kids are capable of now. There's far more intellectual freedom and knowledge that kids have access to, but their physical freedom is totally curtailed.

However, there were some observations about parenting that seemed pretty much the same today. For example, both of us highlighted the same passage when we were reading: "You know, grown-up people often say they do not like to punish you, and that they only do it for your own good, and that it hurts them as much as it hurts you -- and this is really very often the truth" (53). I'm both entirely sure that all parents think that's true, and just as sure that no kid would believe it.

Humor, language, and slang
I know I for one was wondering if I would find the language abstruse or difficult. For example, when thinking of some old "children's classics" like Robinson Caruso or Treasure Island, I just would not want to read those. I didn't even want to read them when I was a kid. But this book was not at all difficult to read. In fact, there was a very funny, albeit dry and British, kind of humor in the book. At one point, one of the kids threatens another with, "smell my fist!"

You also noticed that they used the word "snarky" in the text, which seemed ahistorical. How could such a *now* word have been used back then? I looked it up in the OED, Nesbit is the first person to have used the word in print. Nice catch! (Although you'll notice that they note the first usage in 1906's Railway Children instead of 1902's Five Children and It. Maybe we should send them a correction?!)

Part of the humor came from the narrative voice, which was sort of old-fashioned in that it directly spoke to the reader. Here's an example we both liked:


“But one thing you can’t imagine, and that is how soda-water behaved when you try to drink it straight out of the syphon -- especially a quite full one. But if imagination will not help you, experience will, and you can easily try it for yourself if you can get a grown-up to give you the syphon. If you want to have a really thorough experience, put the tube in your mouth and press the handle very suddenly and very hard. You had better do it when you are alone - and out of doors is best for this experiment." (45)

It sort of made me think of what it would be like to describe the Diet Coke and Mentos trick to a future audience.

Plot v. CharactersSo this book really wasn't about the kids as characters, it was definitely about childhood as an adventure. In fact, it's clear that the real idea is that for each wish that goes wrong, the kids learn a moral lesson. As the chapters build and progress, the lessons become a little more sophisticated and complex.

But a few months later, I can't even remember much about the specific kids except for the baby, who all the kids call the Lamb. And the Lamb is most memorable for what happens in the chapter where they grow him up all at once---as it's a bleak look at a future adulthood where people are cold, brusque, and a little clueless. It's the children's world that is warm, empathetic, caring, and kind.

You made a great point that this one way children's books have really changed. Now, we expect that kids are going to want to latch on to the character in a powerfully empathetic way. We don't just *like* Harry, Ron, or Hermione---we want *to be* them!

Big cultural differences and time changes.
I was cooking with gas, sort of loving this whole thing, until the chapter about the Indians. From a modern perspective, it was absolutely cringeworthy. I guess we should have seen it coming with the references to gypsies...but it was jarring.

However, on the plus side, there did seem to be some attempt at gender equity. You noticed that phrases like "don't be a girl" and "be a man" were more about disdain for adult ways than true gender statements. But in other ways, it was obviously unable to escape its own time period.

One thing we both noticed, too, were the references that were dated because of history that hadn't happened yet. In the chapter about flying and flying machines---the Wright brothers hadn't flown yet! That would have been purely speculative and a total flight of fancy (pardon the pun). At one point, there was a joke about "germs" instead of "Germans," and I had to remind myself that the Germans weren't everybody's permanent bad guys. It was totally an okay thing to joke about.

As an overview, we both found this book charming and delightful. I sort of wished Darius was younger so I could have read it to him, but I would have had to skip that whole Indian chapter.

And I believe you said it best when you said, "The book really captured that sense of every day of childhood being an adventure--that when you're out playing with other kids, anything could happen." I think we both enjoyed this book and reading it together.

Sorry for the super delayed post!
Jenny
Posted by Jenny at 12:36 PM No comments: