As I mentioned in my status post (that I wrote back in JUNE!), I knew pretty much from the start that this book would be a downer, and I was correct. It is set in South Africa the year before apartheid came into being, so you know things are going to be f*cked from the start. Add to that a pretty depressing personal tale and... whee.

Ok! I deleted a few paragraphs here where I tried to tell the story right after I read this book and just got bogged down. It's convoluted and tragic -- some of the same sorts of "Weird-coincidence-results-in-crazy-tragedy" business that I also saw in Hunchback. (Aaaand... this may be the first time in history that someone has drawn a connection between Cry, the Beloved Country and The Hunchback of Notre-Dame...)

When I was in college, I was in a show called the South Africa Project and we did a lot of reading about apartheid, so I have some knowledge of it, but this book was set in the years leading up to it, which is an interesting (and kind of nerve-wracking) perspective -- it definitely adds a certain tension to the story (which is already pretty tense). 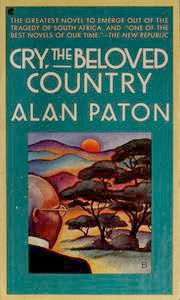 While I was reading this book, you sent me a link to this blog post, showing how almost every book about Africa gets the "acacia tree sunset treatment."

Second row, first book? Yup. That's Cry, the Beloved Country. My copy also has the acacia-tree-sunset treatment, as you can see at right.

What if every book set in the US got the same cover treatment? What would that look like? And eagle flying in front of the stars and bars with a gun and/or hamburger clutched in his talons?

One thing that I found of interest in this book -- things are falling apart in the rural areas, so the people are fleeing *to* the cities for salvation. Of course, that is the exact opposite of what is happening in many modern US cities, where people are fleeing to the suburbs to get away from the sh*t that's falling apart in the cities (hello, Detroit!)

I understand the reasons -- very different times, of course. Just particularly struck me on the heels of reading Detroit City is the Place to Be (yes, another one of my TBR books that I have not written about yet...)

Well, I feel like I kind of pooped out this "review."  It's another book that I wouldn't necessarily recommend, unless someone is really into reading a fictional story set in pre-apartheid South Africa. The writing style is very poetic, which can sometimes be lovely and sometimes feel like a slog, depending on one's mood.


Cry, the beloved country, for the unborn child that's the inheritor of our fear. Let him not love the earth too deeply. Let him not laugh too gladly when the water runs through his fingers, nor stand too silent when the setting sun makes red the veld with fire. Let him not be too moved when the birds of his land are singing. Nor give too much of his heart to a mountain or a valley. For fear will rob him if he gives too much. [80]

See what I mean? It's lovely and it's tragic.

Completed: The Hunchback of Notre-Dame 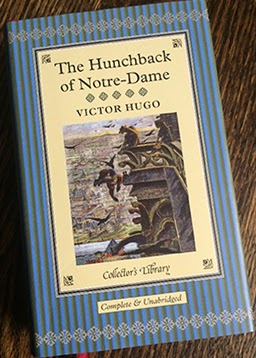 First, a bit about my TBR progress (or lack thereof). Even though this is only my third post of the year, I have actually read eight of my books. This is the ninth month, sooo... reading-wise, I am *sort of* on track. (Ignoring the fact that the ninth month is nearly over... moving on!)

My problem with most of my books so far this year is that... I have soooo much to teeeellll yoooou. Heh. And so I need to make the time to get that all down (before I forget it all!) Or maybe now that so much time has passed, I will have forgotten what I read, so the writing will be easy ("I read this book. Done.") So this is all out of order, but The Hunchback of Notre-Dame* is pretty easy to talk about, so I'm doing it.

My mom bought this book for me when she was in Paris, and then she took a photo of herself holding it in front of Notre-Dame. That's pretty cute, so I committed to reading it. I've never been terribly interested in it, but I have always had a sort of vague notion of: "I... sort of know what that story is about... right?" Which is based on, I guess, "cultural literacy" -- some dude named Quasimodo who rings the bell at Notre-Dame and is in love with a chick named Esmerelda...?

But... when this image comes into my mind, I know there's probably more to the actual story than what we've gotten so far in in life (although I have never seen the Disney version, either.)

So I was somewhat prepared for it to be pretty dark (basically, the opposite of a Disney story) and... it was. It was also a little longer than I think it needed to be. Some have called this book a "Love letter to Paris" and I can see why -- there is a verrry extensive part of the book that is dedicated to describing Notre-Dame in great detail, as well as many, many other buildings all over Paris. I admit: I glazed over. The most interesting part of it was Hugo's condemnation of the changes that have been made to the various architecture -- he's basically pissed about a lot of the renovations/modernizations and his criticism is biting, well-written, and not-at-all veiled.

In discussing the changes to architecture around the city, he acknowledges that yes, time has a hand in any changes (ruination, decay, repair of said issues) but the egregious changes come from humans. About Notre-Dame, he writes: "Upon the face of this ancient queen of French cathedrals, beside each wrinkle, we constantly find a scar. Tempus edax, homo edacior -- which we would willingly render thus: Time is blind, but man is stupid." [138]. This made me laugh out loud -- tell us how you really feel, Victor!

The only other book I've ever read by Hugo was Les Miserables and the person who recommended it to me said, "You can skip the 400 pages about the sewer systems of Paris... " It was good advice -- I skipped that. (There was also a 500 page detailed description of the war that I also skimmed... I was really in it for the love story.) I am grateful that Notre-Dame is about a third the total length of Les Mis, meaning that his digressions did not go on for nearly as long.

While I was reading the "I love you, Paris" part, I did think, "Could we just get to the story already?" but the story ends up being so convoluted that the reprieve into building description might have been a good thing, after all.

Overall, the story is tragic and well-told -- lots of confusion, unexpected reunions of "long-lost" relatives, convoluted situations where people are in the wrong place at the wrong time, and unrequited adoration. But it's also pretty weird -- a few times, I had a sort of "Wait... what now?" reaction to some of the business that Hugo was putting down. Aaaand... If this write-up was for an academic paper, I would have made a note to support that statement. But it's our personal reading blog, so I'll just say: "There was some weird sh*t in this book." (Almost... magical realism, I guess? But then it kind of gets explained away in the next chapter, so there's a sort of, "Just kidding" thing that happens a few times.)

Overall, this book was decent. Cleared up some of my "I think I know what this book is about" misconceptions, but a visit to Wikipedia could do the same thing. The writing is excellent but I'm not sure I would necessarily recommend it to anyone (unless they were super interested in Paris architecture in the 15th century. Then... go for it!)

PS -- I just realized this book was a carry-over from 2013. Go, me with the cleaning up! (Spoiler alert: 2014 could be the year that Don't Know Much About History gets played off the stage before it's done.)

* I hate the title of this book. I've had a couple of friends over the years with kyphosis and it makes me feel icky to use this out-dated term. The name of the book in the original French is Notre-Dame de Paris and I wish that we could just go with that here as well. /rant
Posted by kelly at 8:51 AM 3 comments: 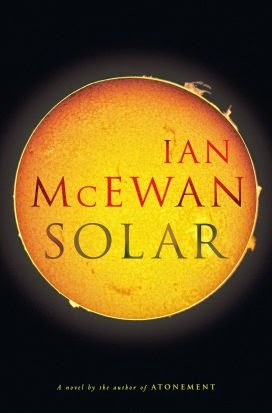 My friend Judy gave me this book, it was a "We're done with it, want it next?" sort of situation. I like free books, I've liked books by Ian McEwan, and of course I'd read a review of it. So why not?

I wish I would have done a little more investigating before putting it on my list. Because as soon as I opened it, I knew I was in trouble: the epipgraph in the front of the book is a quote from one of Updike's Rabbit books. I actually groaned out loud when I saw it.

Oh no. But having already abandoned one book this year, and being unsure about my ability to finish Postwar, I didn't think I could give up on this one. I decided to just read the damn thing despite my misgivings.

The main character, Michael Beard, is a Nobel-prize winning physicist and an absolute and unrepentant dickbag. The book has 3 major sections, in 2000 as a loser coasting along on his Nobel win from at least a decade earlier. In this section, he witnesses the accidental death of someone, and rather than calling the cops, he decides to set up his wife's lover for the murder. Nice. In the second section, five years later, he has stolen all of the intellectual property of the dead man and is trying to make a business out of it, mostly through solar panels. He also finds out one of his girlfriends is pregnant. In the last section, he is about to get his whole solar array started when he is sued by a former co-worker who has proof he stole all the intellectual property.

Kelly. This book was so tedious. This character so self-absorbed. The themes so heavy handed---oh, unlikeable people can attempt to do good things for the world? Oh, the solar scientist is ignoring his own skin cancer? /rolls eyes. He treats every woman he meets with disdain and possessiveness. All his lovers and wives are one-sided and malleable, just a series of generous lovers willing to put up with his bullshit. There was a lot of science talk that I just skimmed through. As the book went on, he drinks and gets fatter, and I just kept hoping the thing would come to a sudden end with a massive heart attack.

Sadly, it was not to be.

Like all of McEwan's books, there was lovely writing and astute observations about the human condition. But mostly, I just wanted it to be over. And now it is.