You know what will really help with getting reading finished faster than anticipated? 2 snow days in a row---thank you Blizzard of 2011! I wonder if any of those poor saps stuck on Lakeshore Drive all night long had a kindle with them to pass the time?

Overall, I liked this book a lot. I'm drawn to narrative non-fiction that tells a good story rather than just recounting facts and statistics. I think Peter Hessler is a great writer. I find myself very swept into his stories about living in China.

The book's official title is Oracle Bones: A Journey Between China's Past and Present. The book is sort of strangely organized, into both numbered and lettered chapters. The numbered chapters follow his life in China in chronological order from about 1999-2002 or so. The lettered chapters tell the story of the history of China through the story of something called oracle bones. It's a complex narrative structure, and the whole time I was reading the book, I was sort of bothered by it. The stories were interesting, but I couldn't help wonder if he was trying too hard to include too many disparate stories. I'm still torn by this, even after finishing the book. However, the alternative probably wouldn't be that compelling either. Would I have purchased this book if it was just a collection of his previously published pieces? Most definitely not. It wouldn't have felt like anything new, and this book definitely works hard to weave together many different threads into a coherent whole. I think he pulls it off in the end, but it never truly feels seamless. (By the way, I'm amused at my use of crafting analogies to try and describe this.)

The Numbered Chapters
Although these chapters are in chronological order, they are further broken down into 3 types of stories.

1) His visits with his former students and descriptions of their lives and the challenges they face as young adults in a rapidly changing China.
2) His friendship with a Uigher (pronounced wee-ger) man named Polat. The Uighers are a cultural minority group in China.
3) His life as a journalist and "foreign devil" in China, including traveling around and talking to people.

These chapters probably account for 70-75% of the narration. I enjoyed these stories. He captured the culture of modern day China, and I enjoyed that. I learned a lot of random and interesting things about China, the world, and even America. For example, there's a radio station that's broadcast everywhere else in the world, funded by the US Government, called The Voice of America. They don't broadcast here because it's against American law to broadcast it here for fear it would become nothing but propaganda. Anyways, it broadcasts in many different languages, but the most popular is in something called "Special English." Special English is limited to a vocabulary of 1500 words and simple sentences. Thousands of people learn English by listening to the Special English broadcast of the VOA. Isn't that fascinating?

The book is filled with fascinating stories like the VOA. I have tons of post-its in my book, things that were especially interesting, that just tickled my funny bone, or showed an especially poignant moment with the Chinese friends he makes. I couldn't even list all of the places, people, and adventures that Hessler takes his reader in China. 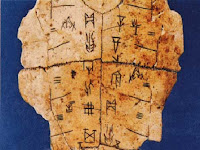 The Lettered Chapters
These chapters were a little more dense, as they contained stories about China's history. The common thread in these chapters are the oracle bones. The oracle bones were used to divine the future during the Shang Dynasty. The bones were cracked---no one knows how they did it---and the resulting patterns were read and used to tell the future. Hessler uses the idea of the Oracle Bones to describe the thought processes of the Chinese people throughout the thousands of years of Chinese history. He investigates the life of an Oracle Bone scholar named Ch'en Meng-chia. Meng-chia's story is tragic as he gets tangled up with the Cultural Revolution and ends up forced into committing suicide.

These chapters were also very interesting, but they were also much harder to follow. Each lettered chapter is about a certain artifact, and then a rumination on what the artifact reflects about Chinese culture. Along with the description of the oracle bones, there are chapters about the Chinese language (completely interesting), archeological digs for ancient Chinese settlements, stories of the Cultural Revolution, descriptions of various museums and their collections.

It was with this structure that I really started to feel the organization of the book was forced. For example, the first lettered chapter is A. Then the continue being lettered until the penultimate lettered chapter, which is L. But the last lettered chapter is Z. Why? Why not just go to M? I mean, would anyone number chapters consecutively, but then feel compelled to make the last number 100? Ugh.

After writing all of this, here's my conclusion: this felt a lot like 2 books jammed into 1. I see what Hessler was trying to do, and in many ways, it works. But ultimately, although I found myself able to follow the numbered chapters pretty easily, the lettered chapters were more difficult. My knowledge of Chinese history is already limited, and now that "historical chapters" are scattered throughout the book. Every time I started a lettered chapter, I had to actively remind myself of what had happened previously. If I could do it again, I wonder what it would have been like to read the lettered chapters straight through, and then go back and read the numbered chapters?

I hate that this ends on a negative note. This book was interesting, informative, and a pleasure to read. I just wish that the author would have trusted us to follow the stories without the strangely complicated narrative structure.