As you may recall, the book is split up into 3 parts. The first part outlined Cronon's thesis. That was kind of boring. The second part discussed in detail the 4 major "crops" that Chicago turned into commodities. The 3rd part discussed the economic reach of Chicago. I left off halfway through the second part, so I'll pick up there. 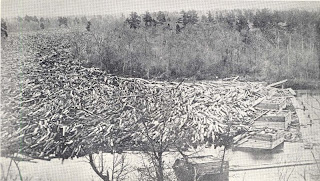 Lumber
I was sure that this section would be the most boring, and instead it was fascinating! Early timber industries in the northern midwest, primarily WI and MN, relied heavily on pine. Why? Because pine floats. All winter long, loggers would chop and stack huge logs of pine by streams and rivers. As the water thawed, logs were simply dumped into the rivers, directed down to Lake Michigan, and from there they floated all the way to Chicago. Eventually, as railroad lines reached further into the North, heavier hardwoods could be harvested and brought to market. Although lumber proved a booming business, the great North woods were completely deforested within an amazingly short period of time.

You'll see the picture of a log jam, another interesting thing I learned about in the book. These massive blockages, some millions of board feet of wood, in rivers as they made their way to the Lake. From what I can tell, these were often broken up by just a few guys who were attached to men on shore with ropes or chains. This brave (or crazy?) individual would walk out over the jam and prod free the logs in the front. If he got into trouble, the men on shore would pull him back. Of course, many times the poor guy just got killed.

The picture above is in the book with the following caption: "Chippewa River logjam, 1869. A logger's worst nightmare happened when logs suddenly got stuck in the river and blocked everything behind them. Logs could back up for hundreds of yards, and the immense pressure could lift them thirty or more feet in the air. A jam like this one emitted an eery dull roar as the logs scraped and creaked against each other." (This also reminded me, dimly, of a novel in which a family is killed by a logjam. Or something like that. Pretty sure it was John Irving.)

Meat
I thought this section would be really interesting, and it was....sort of. Turns out I'm pretty squeamish, so I raced through some parts of this section. Ugh. Turns out there can be a little too much talk of offal. Who knew?

Chicago revolutionized the meat packing industry by "disassembling" hogs and cattle at the Union Stockyards. Yep, that's right: butchery by assembly line. Chicago furthered pioneered the industry by creating refrigerated train cars. In this way, "dressed meat" could be sold thousands of miles and many days past the time the animal was killed. For various reasons, this was very beneficial to Chicago and the huge meat packing industries, such as Armour and Swift, headquartered there. This destroyed local butchers businesses pretty much all over the country. The Union Stockyards could process meat faster, more efficiently, and use more "parts" of the animal than a local butcher ever could. As to how those extra parts were used, some of it was industrial, but some of it was food. This is where I did a lot of prodigious skimming.

The Economic Reach of Chicago
I'm guessing that this is probably the section where Cronon worked the hardest in terms of original research. He simplifies it greatly, but it is obvious that he must have spent a gazillion hours gathering and compiling the data in this section. Basically, the most reliable and accurate financial data from the late 1800s comes from bankruptcy filings. He takes the information and creates a series of maps to show which places Chicago businesses owed money to, and where they were owed money from. As you compare these maps to other cities, such as Milwaukee and St. Louis, you can see how much more extensive Chicago's "reach" was. I'm not much of an economics or money person, so I have a feeling the genius of this is lost on me. Did you ever look at a painting or piece of art, and you know there's something brilliant about it, but you lack the knowledge to explain why? That's how I felt reading this section. I'll give the final word on that to Paul Krugman, a Nobel Prize winning Economist. He said, "His magnificent Nature's Metropolis is the best work of economic and business history I’ve ever read — and I read a lot of that kind of thing."

My Final Thoughts
This book was so interesting, and not in the way I expected. I've read some great stuff about Chicago since moving here. For example, I loved the biography of the first Mayor Daley, American Pharaoh. I really figured that this book would be another Chicago-centric read, and it was, but it was also about all Cities, and how they came into being, and why, and how they are connected to the rural areas that surround it. My review doesn't really do it justice, because I focused on some of the cool stuff I read, while the book is really about the economic relationship between the commodity from the hinterlands and the market that Chicago created for those goods. In that way, I think any city person, or anyone interested in urbanization or economics, would enjoy this book.

I've also been on a bit of a Civil War kick this past year, and the book inadvertently helped me to better understand the mighty industrial strength of the North. For example, at one point, the book discusses why St. Louis wasn't as quick to adopt the grain elevator as Chicago, eventually making itself irrelevant to the grain industry. Essentially, St. Louis relied on slave labor and had no incentive to mechanize work it could get for free. On the other hand, Chicago was able to innovate and think of a creative solution to the problem.

Although this wasn't a Civil War book, because of the overlapping time period, it felt illuminating. It kept reminding me of a point historians often make about antebellum America: the spirit of innovation and hard work was prized in the North and scorned in the South. The reliance on slave labor made "hard work" something to be disdained rather than something to be rewarded. I didn't expect it, but the book revealed how the innovative, hard-working ethos of a big Northern city created something great.

All in all, a great read!
Jenny