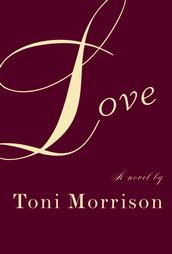 This was not my favorite Toni Morrison novel ever. This short novel centers around a mythic figure, Bill Cosey, who ran a hotel and resort for wealthy blacks in the decades after World War 2. Bill himself isn't a character in the novel as much as he is a ghost. It's the memory of him that lives on in the town: among his friends, his granddaughter, and his wife.

The novel quickly sets up the conflict and it has the sharp writing you'd expect from Morrison. She is an amazing observer of human behavior. I kept marking particularly pithy sentences that capture something true and right about the human condition. For example, a young woman relates her experience of working at Cosey's hotel. Vida is a good cook and an excellent worker, but she "knew she had more to learn than registering guests and handling money. As in any workplace, there were old alliances here; mysterious battles, pathetic victories" (37). These lines really struck a chord with me: how many places have I worked where everyone gets caught up in politicking over something that's largely meaningless? (The answer: a lot.)

But the novel also has some of the regular Toni Morrison challenges. For example, it took a long time to figure out who's who, who's related, and how all the players fit together. One particularly challenging thing to figure out was why Heed called Bill, who was her husband, "Papa." In fact, I spent a few chapters sort of annoyed by this because...WTF, Toni? You can't make it easier on your readers? And then the tales of Heed's relationship got even stranger. At one point, she throws a fit about something Christine did and right there at the table, Bill spanks Heed in front of other people. Jeez, you want to do a little spanking in the bedroom, that's one thing, but to have your husband spank you publicly for misbehaving as if you were a child?

It was shortly after this bizarre spanking scene that the central "mystery" of the plot was revealed. The reason Heed calls Bill Papa is because HE MARRIED HER WHEN SHE WAS 11 AND HE WAS 52. He BOUGHT her from her father. And he basically think he's an okay guy because he even though she was a child bride, he waited until after her first period to bed her.

Kelly. Never before have I felt so grossed out by a book. I mean, I know this shit happens. But....ewww.

I soldiered on but it got worse. Basically, Christine and Heed had been best friends as children until Bill marries Heed. Christine's mother, who apparently was crazy in some ways but sharp as a tack in others, sends her daughter off immediately after the marriage. She had rightly deduced that Christine probably wasn't so safe from the attentions of her own grandfather. (Can we say ewwww again?) Most profoundly, the friendship between the girls is irreparably harmed. Both girls feel ashamed, frightened, and guilty. Instead of turning to each other, they turn against each other. Although the novel ends with a reconciliation of sorts, the tragedy is that they were never able to get past what was done to them as children.

I don't know. Many of Morrison's novels feel "epic" to me in their scope. This one felt insular and isolating, I'd even go so far as to say claustrophobic. It just felt small. I suppose that was the point, but I can't say that I particularly enjoyed it.