I spent a lot of time this week following a rather bizarre and screwed up situation in the land of children's picture books.

Want to read some crazy shit? Buckle in. And in order to get the full story, you'll have to read all these links.

My friend Elisa is a librarian and she blogged about this children's book called A Fine Dessert here. The book itself has a cute premise: follow the making of the same dessert over 4 centuries of American history, starting in 1710 and ending in 2010. However, Elisa points out the real problems with the 1810 section, which is set on a plantation and features a slave mother and her daughter preparing the food for their masters and then hiding in a closet in order to lick the bowl clean.

Honestly, the whole thing is so fucked up, I can hardly believe it got published. In particular, there's an insistence from the illustrator that she did all this research about the cooking implements, the plantation, etc. But there's almost no thought to the child of today who might be reading it. I mean, the words "beat beat beat" appear over each child as they whip the cream, but when it's over the head of a child slave? And then she smiles, and the illustrator says it's to show pride in her work---and I'm just thinking to myself: does no one understand that "pride in your work" is an incredibly fucking problematic way to frame slavery? I mean, come on! You've heard me go on before about how hard it is to find books with black kids in them. This happy slave shit really makes me angry. Not to mention the somewhat obvious fact that the only black people in America in 400 years weren't slaves. CLUE PHONE: NOT EVEN ALL THE BLACK FOLKS AROUND IN 1810 WERE SLAVES.

We've talked about this before---kids know almost nothing about slavery, but they know all the things about the Holocaust. We know a lot about how to teach kids hard things, but when it comes to slavery...it's just like, "oh no! too upsetting!"

This book is seen as a serious contender for the Caldecott Award, which is best picture book of the year. The Horn Book site collects reviews and commentary about the books here. Go ahead and read the comments. You'll see me there.

Well..to make a long story short, this story really blew up this week and there was a ton of discussion about this book on twitter, starting with this tweet from a woman I follow named FanGirlJeanne. You can read lots of the comments, replies, and subtweets. NPR's Code Switch blog posted an article about it, too.

In a way, I guess it all comes full circle. Remember I started out the year talking about how we suppress women's writing? Turns out the same tricks can be used to devalue the voices of readers that are people of color. You would not believe---maybe you would--the invective leveled at people who don't think this is just a delightful little story about a dessert.

Almost always, it's the same rhetorical moves. I'm *SURE* that any person of color could rattle off what I'm listing below with no problem since they're on the receiving end of them all the time. Maybe it's best thought of as a list for white people: Hey, if you find yourself using these moves when you are in a conversation with someone? STOP IT.

1) You didn't read it closely or thoughtfully enough, so you don't understand. (Flat out stating that POC are too stupid to read a fucking 40 page picture book. However, if white folks admit that they didn't read it, no one says boo about it.)

2) Why would all these publishers and reviewers give it all this press and good reviews? (Completely ignoring the fact that the publishing world is completely dominated by white people at every level.) Related to this is another thing I keep seeing, which is: You can't blame one book for not including everything. While this is true, it also completely ignores the monolith of publishing that primarily produces books about white kids.

3) Kids are too sensitive to read books about the real way slavery worked! We have to work our way up to it. You wouldn't talk to a child about such complicated things!

4) The opposite of #3 is also used, which is kids are smart enough to just *figure out* for themselves the way it works. And you as an adult are overthinking it!

5) But what about the feelings of the poor illustrator! I mean, she's *crushed*. She worked so hard! (Conveniently forgetting that the child as reader is who we ought to be worried about.) 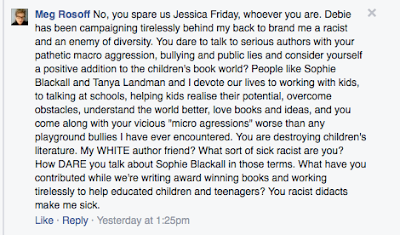 6) Some POC don't think it's a problem, and therefore it isn't a problem. Or, why bother asking because they'll never agree.  (Because POC are a fucking monolith?)

7) I don't think it's a problem, and therefore the voices of many POC who find it offensive must be wrong. I tried my hardest, so what's the problem? (plain, old-fashioned white privilege.)

8) Tone policing: the way your opinions were stated was *rude* and you used swear words, so I don't have to listen. (This is actual reason the illustrator used to *delete* comments from readers on her blog. Real live people came and commented, and she claimed that she only deleted the comments with swear words. Since I saw the comments before she deleted them, I'll tell you right now, that's not true.) And this is so pernicious, and, of course, as women we're familiar with this kind of business. 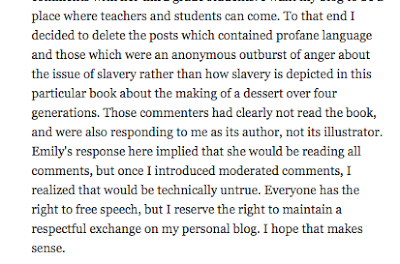 9) What's wrong with portraying moments of happiness in oppressed people? Surely you don't want to just show people whipped and bleeding? This is another one that just kills me. First of all (and as I said in one of my comments somewhere), can we imagine for a hot second that someone would show smiling people in a concentration camp? Of course not! It's inconceivable. Even though we realize there must have been moments of tenderness or togetherness, to show only those moments is to lie about what must have been the overwhelming state of despair. So why are we so quick to accept or embrace this narrative about American slaves? Who is made to feel better when we focus on this? (As an aside, the thing that is most important to teach children about oppressed people is not that they had moments of happiness, but that they had moments of resistance.)

10) Making gross jokes and puns about the subject, which reduces those who object to being the butt of your joke. I mean, why is everyone taking this so seriously?

12) Changing the subject from the thing you're talking about to some other problem. After all, your concerns are not legitimate if you aren't also worried about/angry about/tweeting about/yelling about this other injustice.

13) Any adult critiquing a kid's book has a secret agenda, and they are using this as a soap box to just make themselves heard, to advance their own careers. or to further their own reputations.

14 ) Any critique of a book is a "challenge" or is "ripping it to shreds." Any critique of the book must also be a call for the book to be censored or removed from shelves. (I've seen a lot of people say they wouldn't read this or buy it for their kids, but no one that I've seen has suggested it be pulled from the shelves or banned.)

15) White people shouldn't talk about race. (And this is a tricky one. We should listen more than we say, but if we don't speak out when we see something that's wrong, aren't we part of the problem. As my co-worker Brandon says, "Own your own bias with the kids.")

One thing I've noticed that is fascinating is the difference in responses between the author and the illustrator. The illustrator, who openly blogged about how important it was to find the right plantation and get the trees right, has completely doubled down, while the author has pledged the fee she got for writing it to the We Need Diverse Books campaign. (I'm really fucking grateful this is true, because it turns out the author Emily Jenkins is also E. Lockhart, author of YA books I really love and recommend to my students all the time.)

Honestly, it's been a disheartening thing to watch. And then this happened yesterday, the editor of Horn Books published this little screed, which makes me wonder why the hell he's in this job anyway. I mean, GOD FORBID kids want to see themselves in the books they read? (This came to my attention when an editor from Book Riot that I follow on twitter posted a tweet calling it a garbage fire. Seriously.) Although honestly, even I'm forced to admit he makes some good points, but they're buried in the snark.

Luckily, I've discovered some amazing new voices this week. This woman, Debbie Reese, is basically a social justice warrior who blogs about how Native American kids are portrayed (or not) in fiction. Lots of folks called out the bullshit and kept insisting that their voices be heard.

And then today, a guy on Twitter wrote a bunch starting here about the fact that we should want kids to read and think critically!

Mostly, fellow white people of the world, I wonder why it's so hard for us to just LISTEN to experiences that are different than our own? Why must we insist that we are right, that it's just being "PC", that people can't read, don't get it, and are just being bullies when what we should do is just stop and fucking LISTEN and absorb the fact that perhaps the dominant cultural narrative we are always selling might be harmful, offensive, or ill-conceived?

Sheesh. As Mike Jung said: "How can anyone seriously propose the idea that certain questions should be off-limits to kids who read? Fuck that. The HELL with that."

Sort of disgusted by all this. We're supposed to be doing better.

PS. A lot of conversations sparked my list above, so I can't claim noticing them all on my own.
PPS. I was really on the fence about these screenshots, but everything above was posted openly on social media.