[Jenny, you wrote this in August. It's November, and I am finally adding the Bitmojis and publishing... it is amazing to me how the events of just the last month would change some of this discussion. I'm going to leave this time capsule right here, though. -kelly] 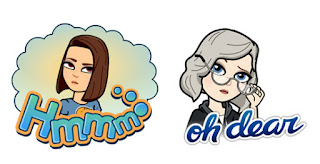 This book was your pick, and it had been on your TBR shelf since 2000. I had never heard of it before, so it was a new to me read.

Cunt is feminist manifesto that was written in the late 90s but was updated with a long afterward in 2009. This is a difficult book to write about and we both had our struggles with it.

First of all, let's get the elephant out of the room: the fixation on a body part as the defining characteristic presents some problems given how quickly our understanding of gender is changing. In the 90s, we did not understand the concept of "transgender" in the same way we do now. Right from the get-go, you and I both had some yucky feelings about this. The author does address it in her afterward, but to me, it felt like a more wholesale rewrite was in order. The author ends up sounding like a TERF throughout the book and neither of us liked it much. I'll return to this idea at the end of the review.

Early on in my reading, I texted you saying something like, "This book is way too woo for me." You rightly pointed out that was probably the reason to KEEP reading rather than give up on it. Eventually, I decided to focus on the parts of the book that did work for me rather than the parts that didn't. For example, I was completely fine with her talking about her abortions, but was rolling my eyes at the whole, "I self-induced a miscarriage with some herbs, massages, and the power of my thoughts!"

For me, the most powerful part of the book was her discussion of rape. That was the place I was most in alignment with her. Fuck yes, the idea that women spend their entire lives afraid of being raped is just bananas. The pervasiveness of rape culture and the way it impacts us makes me so angry. At one point, she explains how her mother finally told her daughters she had been raped. She writes, "A man could, feasibly, sacrifice his coffee break raping a woman. That woman would then spend her entire life dealing with it. So would her daughters. So would theirs. This distribution of power is not acceptable" (146). This struck me as absolutely true. My friends who have been raped will never get over it, the pain is still palpable and powerful in a way that is heartbreaking. I'm sure you have had the same experience. While reading this book together, we both reflected on how there is a basic and profound difference in how much freedom men and women have over their own bodies.

During our discussions, you spoke a lot about the role of the media and how the Internet is shifting the landscape for women. The part of the afterward where she discussed George W. Bush was especially powerful for you. You and I had a similar conversation when I read a book you gave me, 100 Demons by Lynda Berry. Given the current US Administration Nightmare, there's been so much retroactive, "Hey W wasn't so bad!" rhetoric. But it's not true! And reading about the pain and anger of people at that time reminded both of us how upsetting it was. The horrifying urgency of now does not erase the mistakes of yesterday. But our reaction to/actions against the horrors are so different now than they were then... the Internet has made organizing the Resistance possible. Not that there were not effective pre-Internet protests and movements, of course. There certainly were, but today, the accessibility to the information is right at our fingertips. Rather than plan a rally months in advance, we can motivate and get the word our to our networks immediately. Even during W's presidency, the web was not nearly has complex as it is today and far more people can and are getting involved in this fight.

We had a hard time focusing on the book itself, instead using it as a springboard to talk about how the issues described play out in real life. We talked about memory and forgetting and how to make sense of how retrograde and regressive the world is becoming. This book honestly left us both a little despondent.

Although it's A manifesto, it wasn't OUR manifesto. We talked about how the framework for this call to action is so troubling: embrace the power of your cunt! Isn't it the case that men embracing the power of their dicks is a huge reason the world is completely fucked up? Do we really want to mimic these failures as a metaphor for our power as women?

You pointed out that there has to be something different, more honest and open, about the way we talk about the power of being a woman -- and all women! not just white, cisgendered, heterosexual women! -- So let's embrace our power as one that's inclusive, welcoming, and freeing. I don't need cunt-swinging to be a metaphor for my power or yours. I want the world to be different, but this fucken approach didn't quite speak to either of us.