Go, me! I finished a TBR book! I started it 10 days ago and it's done and I'm already posting. Yay! Of course, it turned out to be a quick and easy read. But still -- I'm gettin' it done! (Okay. I'll stop patting myself on the back for reading a frigging book now...)

I'm not sure what to say about this book because... I liked it and it was kind of fluff. Sooo... what is there to say? Good characters, a fine story -- even a little bit of a "mystery" that carried through to a pretty satisfying end. Plus, it's set in the South and I have a weakness for southern lit, so... thumbs up!

I only had two little problems with it.

Again, not the author's fault, but it was seriously grody talk for what turned out to be a pretty good "self-discovery" novel (without much of the ickiness alluded to in that copy).

2. This is not an uncommon writing device, but I still do not like it -- frontloading the book with something that is going to happen later. I always feel like it's kind of a spoiler. And, while I actually don't mind "spoilers," I feel like they should have warnings.

The opening line of the novel:


"In the middle of my marriage, when I was above all Hugh's wife and Dee's mother, on of those unambiguous women with no desire to disturb the universe, I fell in love with a Benedictine monk.
"It happened during the winter and spring of 1988, though I'm only now, a year later, ready to speak of it. " [1]

It takes over 150 pages for her to hook up with that dude, but... you know it's going to happen the whole time! She already told you! Meanwhile, that was in a Prologue. Re-reading the first line of Chapter 1 now, I feel like it would have been a stronger opening to start with that.

More does happen after the hookup, so not everything is spoiled, but I still can't help but be a little irked. 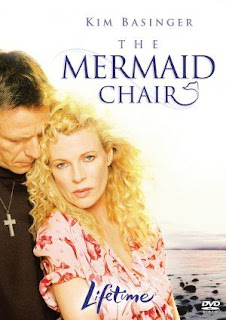 As a random note... this book was apparently made into a Lifetime movie, the poster of which is to the left there. And... yeah. It's also pretty spoiler-y with Kim Basinger's come-hither look and the cross on that guy's neck. (Psssst! She's going to have a forbidden love affair with this here monk!!)