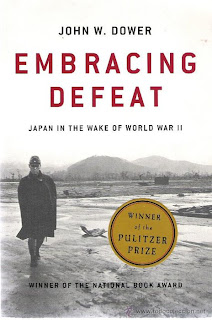 Allow me to start, if you will, with a digression. In the last few months of college, part of the process for completing my senior thesis was participation is a symposium-type event. Every senior working toward an honors thesis had to give a brief overview of their proposal and the research they had completed thus far. I vividly remember this event for several reasons.

Interestingly, I don't have any real memory of my own presentation. However, it was the first time in the year-long process that I had any suspicion that some kids weren't going to be able to complete a thesis. I remember one guy in particular had some half-assed, partially-articulated idea about the mob in New Jersey (this predated the arrival of The Sopranos by several years, of course). As I sat there listening to him, I realized that he hadn't done what he needed to do to finish. It was clear that he was floundering.

On the other hand, my friend Anne Marie presented her work about World War II Japan. The only particular part of her research I remember that she discussed how the top-down industrialization of early 20th Century Japan led to the mindset for total war in the 1930s.* Either way, her presentation was forceful and polished, and it was the first time in my life I remember being interested in World War II. I remember thinking to myself, I should learn more about that.

(I digress from my digression to also tell you that looking back, it was a probably one of my first teacher-y moments. There was something about that day that made me realize just how accurately I could judge the preparation and production of my fellow students.)

In the intervening years between Anne Marie's presentation, I've learned a lot about World War II. Some of it was just reading (A particularly good overview recommended to me by my brother, Erik, is Freedom From Fear: The American People in Depression and War, 1929-1945. It's part of the Oxford History of America series, and all the ones I've read have been fabulous.) and watching movies. But in the last 5 or 6 years, much of my World War II reading has been driven by my teaching of The Diary of Anne Frank.

Historical memory is an interesting thing, especially when it comes to middle schoolers. As far as they know The Holocaust IS World War II. They literally know nothing else.

This is a problem.

To compensate, I spend some time contextualizing World War II for them, but I'm an English teacher not a history teacher. Therefore, although I explain the Allies and the Axis, and although we briefly discuss Pearl Harbor and the role of Japan in the war, we do, out of necessity, spend most of our time on the war in Europe. But as the years have passed, I still had that inkling in my head, dating to Anne Marie's presentation, that I would like to know more about the history of Japan.

One of the best online resources I've discovered, although I've never used it with kids, is out of MIT. The project, called Visualizing Cultures, focuses on China and Japan and the connection between images and history. A series of lessons called Throwing Off Asia described the westernization and industrialization of Japan. It was fascinating and I see that they are adding new content all the time. It was through that website that I somehow ended up hearing about the book Embracing Defeat.

The book Embracing Defeat describes how the Japanese people reacted to their loss and surrender in World War II. The book extensively describes life in Japan after the war. Parts of the book were fascinating to me. The book starts by describing the epic destruction of Japan, and the increasingly dire food shortages that affected the Japanese people in the years after the war.

I had no idea that General MacArthur and the American military essentially controlled Japan after the war. The irony of the "democratic" victors ruling Japan with an authoritarian fist provides much of the tension between victor and vanquished. Also, because hardly any of the Americans spoke the language or knew anything of the culture, they relied heavily on the extant governmental structures and agencies. MacArthur and his men had no interesting in having Japanese experts on their staff. The Americans initiated and instituted laws without worrying or caring about the culture. Women's suffrage: done! There's a great story how one Japanese bureaucrat pushed through a progressive series of Labor Laws by convincing everyone that the Americans had demanded them.

I found the book most interesting when they described the human cost on individuals and families. For example, the Japanese government sets up brothels all over Japan for the US servicemen that arrived in the country. There were even different prostitutes for the white soldiers than there were for the black soldiers.

This is an engaging work of history, but I lacked some of the background knowledge to have it all make sense. There were extensive discussions of military, government, society, etc...and sometimes I just felt a little lost. I read through that pretty quickly, slowing down at the more personal stories that he used as examples.

Honestly, my primary problem with this book is that it just wasn't the book I wanted to read. At one point, the author tells the story of three men who were considered enemies of the state during the war, but afterwards became heroes for their objections to the war. The author observes, "They were all principled individuals who embodied qualities of independent thought and personal autonomy rare and admirable in a country where most people had caved in completely, in many cases enthusiastically, to the authoritarian state" (191). And I realized that what I was curious about was what happened before the war. How do you get people to knuckle under so completely? This is a question I find utterly fascinating. How do the Nazis get the German people to comply so completely with the Final Solution? How and why do everyday people become agents of genocide, as in Rwanda? What does it take to make this happen? What does it take to make it stop?

The book I want to read is the one that describes what my friend Anne Marie discussed all those years ago...and this book talks about its aftermath. This is not the book's fault, of course, but it led to a feeling of disappointment nevertheless. I suppose I will spend more time than I usually do combing through the endnotes, looking for references to books about Japan before the war.

Now, on to the extremely pleasant task of looking for next year's 12 books. We have until December 31st to get our lists together and linked up to Roof Beam Reader.

*I'm Facebook friends with Anne Marie even though I haven't seen her in almost 20 years. I posted my blog entry to her page. I anticipate that I probably got all the details wrong, so I'm semi-curious to see if my memory was at all accurate. I'm sure going to be mortified if her thesis was really about something completely different!
Posted by Jenny at 3:05 PM