Well, this was a fun read. Especially since I got snowed in and basically read it in one day. There were, of course, a ton of photos (and even several pages of excerpts from old WW comics) but also a lot of interesting info.

I bought this book years (and years!) (seriously -- the copyright is 2000) ago on a whim: I like Wonder Woman and here's a book about Wonder Woman. Awesome. Done! And then... it sat on my shelf. Until now. (Thank you, Adam, for the motivation I finally needed.) 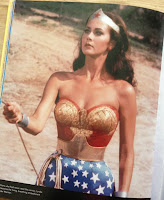 I must admit that when I think of Wonder Woman, it's mostly of Lynda Carter in her kick-ass 70s getup (seen at right). I loved that show and have fond memories of watching it after school when I was a kid. But Wonder Woman has a much longer history in the comics and part of her awesomeness is that she's one of the Superhero Big 3: Superman, Batman, and her. Her comic has been going strong for over 70 years. You go, girl!

I liked the organization of the book, which was divided into five chapters:
I learned a LOT about Wonder Woman reading this book. Her story got kind of convoluted over the past 70+ years, was reset in the 80s and, according to wikipedia, again in 2011. It was interesting to read how different writers and illustrators tell different stories about our Amazon princess, including changing her origin story about a dozen times.

Truthfully, I probably would have been entertained by a book devoted exclusively to photos of crazy crap like these scissors. (OMG. These scissors. I guess the saving grace is that they didn't have her vag cutting the paper, but... ack. Still so weird.)

The caption is great: "They may have cut paper correctly, but there's something disturbing about the design of these six inch scissors from Dyno Merchandise." [151] (Ya think?)


However, I did enjoy reading more about her. The only real hassle I had with the book was that a lot of times the narrative was interrupted with either photos,  call-out blurbs, or pages of comics. That was kind of distracting. I guess that's the nature of a book like this, with so many illustrations, but I'd like to think that some careful editing would prevent readers from holding their place in the middle of a sentence while flipping through 4 or 5 pages of material that they also want to go back check out. But I'm not a book editor, so what do I know?

My only content gripe is that quite a bit of the book was dedicated to her creator, who was a bit of a weirdo... he invented the lie detector test and then proceeded to use it for all kinds of weird-ass experiments, dating compatibility tests, and commercials; even though it has been repeatedly proven to be unreliable (same test as the one they use today -- and still just as unreliable).

He was a shrink and he had some, um... interesting ideas about the relationships between men and women, including the basic premise that women... want to be tied up? Or... that men want women to be tied up? Or that women demonstrate dominance by being submissive?  I don't know. There was a lot of bondage crap and I kind of skimmed over it, although they make a pretty good point that Wonder Woman both gets tied up a lot and ties other people up a lot (the Lasso of Truth!) His sort of "defense" of this is that he wanted WW to be less violent than other comics, so if you take away guns and knives, how do you get villains to submit? Ya tie 'em up. I'll take that, except... you have got to check out this next image. What the hell is that?! 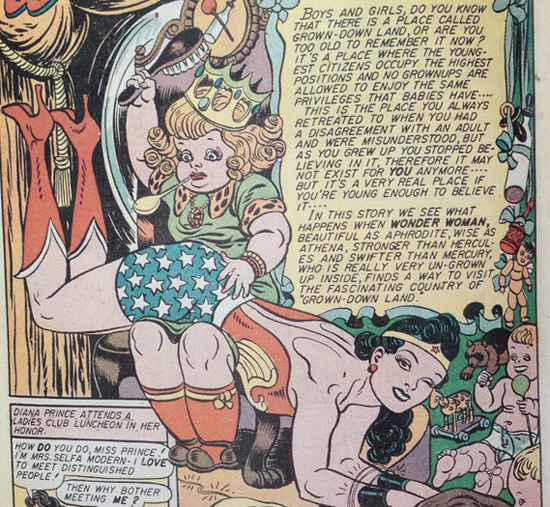 I'm sorry. I know you can't unsee that. It's just... I had to share. I spared you from meat lap earlier this year, so thank me for that (remind me to show it to you this week, if you still want to be scarred with that image, btw.)

I just read some reviews of this book (I was looking to see if there was an updated version. There was a re-print in 2004, but I don't know if anything was added.) and one person commented that the author clearly did not like Wonder Woman, and I gotta say that I agree. A lot of focus on her weirdo creator, then a sort of zooming through most of her history and a mocking of the time in the 70s when she renounced her powers (!!!) to "live with man." I actually read a lot more about that in the wikipedia entry and that time is way more interesting than this book makes it out to be -- she learns martial arts and becomes an ass-kicker on her own with zero Amazonian powers. She really IS a Wonder Woman!

This book was published in 2000 and there's more to her story -- as I mentioned, there was some kind of total revamp in 2011, with a new origin story and everything. At this point, I am feeling a bit like a Wonder Woman nerd, but I am interested reading more, particularly this one: Wonder Woman: Amazon. Hero. Icon (I will admit, however, that the Wonder Woman Encyclopedia scares me -- that is a lot of information about Wonder Woman!)

In addition to the clips from the comics and some of the crazy WW tchotchkes, there was a lot of great WW art in this book, including one of my favorites -- Wonder Woman: Day at the Fair by Steve Rude (WW and kittens? Yes, please!) There was also an uncredited piece that I adored and just found using Google reverse image lookup (Have you ever used that? I'd heard about it, but this is the first time I've tried it -- totally awesome.) It's this image by Brian Bolland -- I love that pissed off look on her face! (It turned out to be the cover of Vol 2 #81). Another of my favorites is far more recent, so not in the book, but you gotta check out this priceless look on her face as envisioned by one of my favorite contemporary artists, Lora Zombie.

And just to end on a bit of hilarity, check out these two "unauthorized" Wonder Woman products... hahahaha: 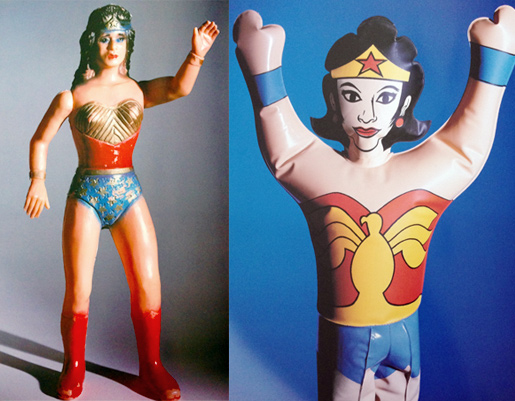 (That babe on the left is totally killing me.)

All right. That's Wonder Woman for ya. Up next... Nox!