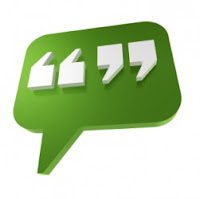 I finished The Round House, and I have decided to stop getting worked up about this quotation mark thing. How, you ask? BECAUSE I AM NEVER AGAIN GOING TO BUY A BOOK WHERE THE AUTHOR OMITS QUOTATION MARKS. Although I am disappointed by Louise Erdrich, I am not going to write her a letter.* I'm going to let my wallet do the talking and just stop buying her books.

There. I just made it my New Year's/Forever Resolution. It's going to mean constant vigilance: taking the time to download a sample before purchasing the eBook; rifling through the pages of a pBook before taking it up to the checkout counter. Life's too short for me to read books that make me feel like the author just took my money and then gave me a swift kick in the teeth.

I actually had a rather involved conversation about this in a private Facebook group today, which helped to clarify just why I find it all so annoying. I'll summarize for you here.

A friend replied that "Quotation marks serve to enhance the illusion of realism. Eschewing them emphasizes the subjective, private nature of the narrative. It's fine to hate it, but there's a reason authors choose to do it."

I reject this reasoning, too. Literature itself is a construct. NO ONE thinks like characters in books do. The idea that you can make a narrative more introspective by taking away a punctuation mark just seems silly. Even in Erdrich's novel, it's clear that Joe, the narrator, feels voiceless. In fact, Joe's family, tribe, and entire race of Native American people have been voiceless. This idea is cogently understood from the narrative. What kind of weak sauce is it to use punctuation to prove the thematic point of your novel? It seems like the exact opposite problem of a child who punctuates a sentence with too many exclamation points. At the end of  sentence, the only thing a hundred exclamation points proves is that the writer doesn't know how effectively use expressive language. If an author must prove their point by taking away punctuation marks, that must mean they aren't confident enough in their language alone.

Another friend pointed out that there are different punctuation conventions in different parts of the world. I know that. Ireland comes most readily to mind, where authors start quotations start with an em dash. I don't have a problem with this at all. They are authors following the punctuation conventions of their own culture. But what else am I to make of only *certain* American authors deciding that going quotation-mark-less is the thing to do? Maybe it's my own experience of spending time with teenagers. It feels an awful lot like something the cool kids are doing. Cormac McCarthy did it, and so we should mimic him! Ugh. Grow up.

Finally, and most importantly, I don't actually believe there are readers out there who ACTIVELY SEARCH for books with irregular punctuation. I think there are folks who don't mind it, or folks who can live with it. But is there anyone out there picking up books and saying, "Oh, this novel uses standard punctuation. I better give this one a pass." I doubt it. Which leads me to believe that authors are doing it for their own pleasure or satisfaction, while not caring about their readers. And that's just fine with me. It's your book, write it how you want. I'm voting with my dollars and refusing to buy your book. Now we are all satisfied.

Nothing proved my point today as well as the other book I finished, The Yellow Birds, by Kevin Powers. This novel is intensely introspective, a soldier's recollection of events during the Iraq War. At one point, John's mother encourages him to spend time with his pre-War friends. He demurs, and she pleads with him to "just think about it." He snaps back at her, "Goddamnit, Mama. All I fucking do is think." And he's right. John is caught in a maelstrom of painful memories of what he saw, what he did, and who he was.  The Yellow Birds was definitely less plot-drive and more internal than The Round House, yet it still employs standard punctuation. Not once while reading did I think that less punctuation would have made the author's point more clearly.

I am woman enough to admit that there may be exceptions. Teju Cole's Open City, a TOB book from last year, is a good example. As the novel progresses, it becomes clear that the narrator himself is unreliable. He lies to himself about what other people say. The quotation marks are a subtle clue that he's not telling the truth. This is one of those books with staying power, something about it really stuck with me. I'm happy to have read it. However, I'm not all that sure it was necessary. I think the book would have been equally as powerful with regular punctuation.

This is a literary trend that I'm done with. There are more books out there then I could possibly read. Will I really be missing anything except my (most likely irrational) anger?

*As for Louise Erdrich, I briefly considered penciling quotation marks into my copy of The Round House and sending it to her at her bookstore. But even I know that's crazy. And it would take too long. But I still can't believe that line at the end, she has the narrator look at a stack of books and think, "There were no quotations in my father's repertoire for where we were..." I mean, really?!?!

But you know what I'd do if I had all the time in the world? I'd start a blog called Necessary Quotation Marks and put quotation-mark-less passages from books, followed by the same passages with quotation marks. Hah!